Boom! Space Force Terminated this Rocket After it Flew Out of Control 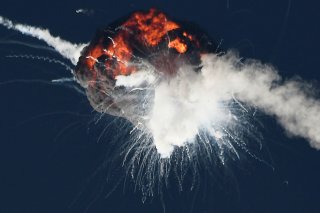 A large rocket designed to carry satellites into space exploded just off the coast of California after it suffered an anomaly just minutes after taking off from a launch complex at Vandenberg Space Force Base.

“More than two minutes into the flight, Alpha experienced an anomaly resulting in an early end of the mission,” Firefly explained in a statement. “At Firefly, our goal is to always look out for the safety of our employees, partners, and community. We are happy to report that there were no injuries associated with the anomaly.”

The rocket, called Alpha, is built by Firefly Aerospace and specifically targets the small satellite market's transport needs. Priced at $15 million, Firefly claims that the Alpha rocket offers the lowest cost per kilogram to get satellites into orbit for its vehicle class and can carry about one metric ton of payload into Low Earth Orbit, or 630 kilograms to Sun-Synchronous Orbit.

In 2019, Firefly Aerospace took over Vandenburg’s Space Launch Complex 2 West to support the company’s Alfa and Beta rocket launches after more than half a century of Air Force service. In addition, Vandenberg Space Force Base hosts other rocket projects on other launch complexes, perhaps most notably the Ground-Based Strategic Deterrent, an intercontinental ballistic missile (ICBM) currently in development and slated to replace the United States’ Minuteman III ICBMs.

Video footage of the rocket launch captured the rocket’s seemingly normal liftoff and the missile’s fiery explosion just moments after tumbling out of control.

The rocket’s “early end” (i.e., explosion) was not accidental. A Vandenberg Space Force Base statement explained that the rocket launch complex decided to “terminate” the rocket after it flew out of control to prevent it from falling back to earth and exploding on the ground.

In addition to entry-level rocket transport to space, Firefly Aerospace has several other vehicles in development, including a larger, more powerful rocket based on the Alfa rocket, a lunar lander, and a reusable rocket-powered plane-like launch vehicle.

Firefly’s statement about the botched flight was positive, despite the explosion. “While it’s too early to draw conclusions as to the root cause, we will be diligent in our investigation, in partnership with the FAA [Federal Aviation Administration] and Vandenberg Space Force Base. We will utilize the data we obtained from the test flight and apply it to future missions. Our engineers are currently combing through thousands of lines of ground and flight system telemetry in order to better understand what occurred.”