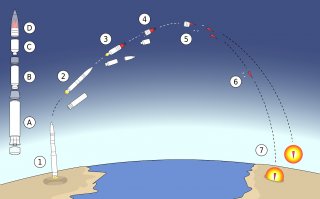 Under the New START treaty, the United States’ Minutemen were somewhat defanged—as of 2016, the Minutemen III missiles have just a single warhead each. Originally, each of the 500 or so missiles were equipped with three warheads each, for a grand total of about 1,500 warheads.

They certainly highly capable—and possibly the most powerful missile system in existence, but the mighty Minutemen III have been in operation for about half a century. Though the missiles are periodically upgraded and serviced, their usefulness is not set to last much longer, and the missiles are slated for replacement before the end of the decade, in or around 2027.

In 2017, both Northrop Grumman and Boeing were awarded contracts to develop their own Minuteman III replacement. Both contracts are said to be worth over around $330 million.

If all goes according to schedule, one of the two companies will be selected to build the Ground Based Strategic Deterrent missile in August of this year, although production delays could delay the program timeline.

One of the few aspects of the program that is known however, is the GBSD’s warhead, the W87 warhead. According to the National Nuclear Safety Administration, the W87 “will not provide new military capabilities, yet it will provide enhanced safety and security compared to the legacy W78,” and will have among other things, a longer shelf-life. Transitioning from the W78 to the W87 will be a breeze. “The W87-1 will be certified without the need for additional underground nuclear explosive testing.” The W87 will likely stay in service with the United States until 2075 or later.

Once completed, the United States’ Ground Based Strategic Deterrent will not necessarily bring additional capabilities to the United States’ land-based strategic nuclear deterrence, but it will require less servicing and have roughly the same shelf-life as its Minuteman III predecessor. Watch this topic closely for new developments in the near future.