The Boomin Beaver is the U.S. Navy’s Smallest Ship 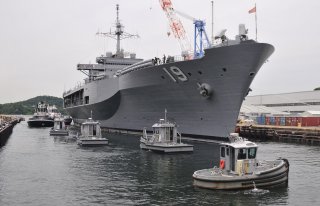 The crew of USS Gerald R. Ford (CVN 78) is completing its training as the ship prepares for its first deployment and combat readiness. At about 100,000 tons and with a length of 1,106 feet the supercarrier is currently the world’s largest aircraft carrier and the largest warship ever constructed in terms of displacement.

On the other side of the world is the U.S. Navy’s USS Pueblo, originally built for the U.S. Army in World War II before being re-designated an environmental research ship while in fact it was used for signals intelligence gathering. At just 177 feet, USS Pueblo – which was armed with a pair of M2 Browning .50 caliber machine guns—remains the smallest “warship” in the United States Navy. Despite the fact that she was attacked, boarded and seized by the North Korean military in 1968 while officially in international waters and has remained a tourist attraction for some fifty years, the ship is still considered to be commissioned by the Navy and remains the second-oldest commissioned ship in the Navy after the USS Constitution.

The Navy has smaller vessels of course—but they just aren’t “warships” and the smallest of them all is the Boomin Beaver-class security tug, which is just 19 feet long and has a draft of five feet. As noted that is a “class” of vessels, because according to a Federal Contract Opportunity posting from 2011 that called for a refurbishment, the U.S. Navy had at least two of the tugs.

One of those was also sold at auction in June 2006, reaching a final price of $100,025 plus fees. The government auction website described the Boomin Beaver as “originally designed for the commercial logging industry to raft and pull floating logs, the US Navy used the boat to open and close barriers around naval installations.”

The auction notice also listed a Cummins 6BTA5.9 diesel engine that was rated for 260 horsepower with ZF transmission.

It is unclear when the Navy obtained the pair (or more) of the small tugs, which were built by Chuck’s Boat and Drive in Longview, Washington, but it has been noted that the Navy later employed the craft to deploy underwater fences and to tow some of the Navy’s smaller craft.

At least one reportedly operated out of Point Loma Sub Base in California, while Popular Mechanics reported that another could be seen in a port near the USS Constitution Museum in Boston. Photos show it “operating the floating barrier” that surrounds the aforementioned oldest commissioned warship in the U.S. Navy.

It is likely more than two were purchased as well, as Popular Mechanics noted that a Boomin Beaver could be seen at Naval Base Kitsap Bangor and Naval Base San Diego, and all of the ships are located near floating security nets.

There is no word on the size of the crew complement or how many of these vessels are (still) in service. While the Navy is quick to point out the merits of its largest vessel its smallest one seems to get no mention at all.