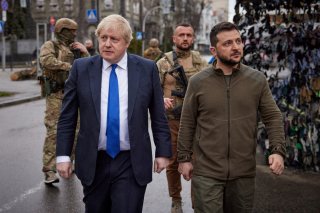 British prime minister Boris Johnson made a surprise visit to Kyiv on Saturday, meeting with Ukrainian president Volodymyr Zelensky and touring the city to speak with locals impacted by the ongoing war with Russia.

A video of the two leaders was circulated by Ukraine’s Ministry of Defense on Twitter, praising Johnson for his ongoing assistance to Ukraine and his condemnation of Russian leader Vladimir Putin for instigating the conflict.

During his visit, Johnson indicated that Britain would provide additional support for the Ukrainian government, including through the provision of 120 additional armored vehicles and a set of anti-ship missiles, which the Ukrainian military had previously lacked. He also confirmed that Ukraine would receive an additional $500 million loan guarantee from the World Bank.

The prime minister also indicated that British economic pressure would increase on Russia in the aftermath of the Bucha massacre, in which Russian troops killed several hundred Ukrainian civilians during its three-week occupation of the northern town. Johnson promised that the new sanctions package would include “not just freezing assets in banks and sanctioning oligarchs, but moving away from the use of Russian hydrocarbons.” However, only around 5 percent of Britain’s energy supplies are imported from Russia, compared with the European Union’s 40 percent.

Johnson later complemented Zelensky for his leadership during the war.

“The Ukrainian people have the courage of a lion,” the prime minister tweeted. “President [Zelensky] has given the roar of that lion. The UK stands unwaveringly with the people of Ukraine.”

Johnson is the second world leader in recent weeks to visit Kyiv, which has become marginally safer since the Russian army’s withdrawal from northern Ukraine last week but remains an active war zone subject to Russian bombardment. Also on Saturday, Austrian Chancellor Karl Nehammer visited Kyiv for an in-person meeting with Zelensky, in advance of his meeting with Putin in Moscow.

“We will continue to stand shoulder to shoulder with Ukraine as they fight for freedom and stand up to tyranny and oppression,” Bailey wrote on Twitter.