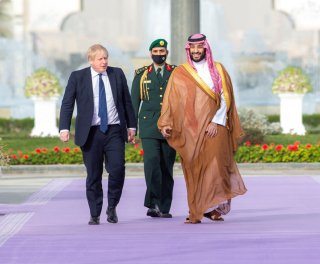 Johnson spoke with MbS about Russia’s invasion of Ukraine and the ongoing disruptions to the global supply of oil. The two leaders, joined by Saudi energy minister Prince Abdulaziz bin Salman, signed a memorandum of understanding to establish a strategic partnership in the energy sector.

Johnson’s visit to Riyadh is part of his broader tour of the Persian Gulf. Prior to his arrival in Saudi Arabia, the prime minister traveled to the United Arab Emirates to discuss “opportunities to increase collaboration on energy security, defence, and trade” with Crown Prince Mohammed bin Zayed, the de facto ruler of the United Arab Emirates.

The trip abroad comes as Europe seeks to divest from Russian oil and natural gas, which has until now supplied roughly half of the continent’s energy needs. However, Europe has failed to find enough alternative suppliers to abandon Russian energy altogether.

Although Saudi Arabia, the world’s largest exporter of oil, is an obvious choice to replace Russian oil purchases, many Western leaders have been reluctant to meet with MbS, the country’s de facto leader, after multiple Western intelligence reports implicated him in the October 2018 murder of Washington Post journalist Jamal Khashoggi. Western observers have also criticized Saudi Arabia’s human rights record, including its ongoing war in Yemen and its recent mass execution of more than eighty prisoners, which the UN argued came after trials that failed to meet international standards of due process.

While Johnson promised before his departure that he would raise human rights issues with the Saudi crown prince, he also vowed that the “very important relationship” between London and Riyadh would remain intact. He also insisted that Europe’s dependency on Russian energy had allowed Russian leader Vladimir Putin to “blackmail the West” into accepting Russian interference in other Eastern European countries.

Johnson also said that he would ask MbS and MbZ to issue a condemnation of Putin’s actions in Ukraine. Both leaders have remained neutral in the conflict, likely owing to both nations’ extensive business ties within Russia.