Britain’s Achilles Heel: London Needs to Play Catch Up With Its Tank Force 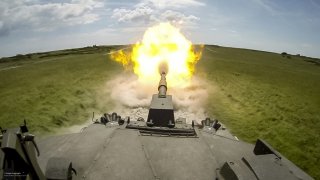 The United Kingdom is just leaving the European Union. How much of a strategic revolution will this be? Not that much: the chasm is elsewhere. The real landslide is far more ancient, and London is still adapting to a strategic setting that is decades old, nearing a century. The last battle for sovereignty dates back to the 1940s when the integrity of the UK’s territory was very much at stake during the Battle of Britain. In the 1970s and 1980s, London was again confronted with the prospect of losing territory with the Cold War—a large-scale threat—and the Falklands War—a smaller but more actual one. In the former case, the needed capacity was to defend the homeland: little or no mobility was needed, only widespread firepower. But the expedition to Argentina was a reminder of where the British Army had always been most at ease: expeditions—the ability to strike far, fast, and hard. For that, reactivity and nimbleness are at stake, and such capacities require in-depth planning and preparation.

Germany holds a formidable force, with its Bundeswehr, and yet represents everything Britain doesn’t need. Berlin holds virtually no expeditionary capability, and the actual military value of the German army is even subject to debate. Germany upholds high military expenditure both to show respect for its NATO commitment (despite taking little part in NATO operations) and as a means to support its large military industry. In short, it matters little to German commanders and decisionmakers which type of equipment they choose, as said equipment has little chance of ever seeing combat. Deutsche Welle reports how Germany contributes financially and in some support roles, but partakes minimally in actual operations: “Berlin has approximately 980 soldiers stationed in Afghanistan for NATO's Resolute Support mission, which aims to "train, advise and assist the Afghan security forces and institutions" after the end of the decade-long International Security Assistance Force (ISAF) mission.” Likewise, German equipment is notoriously too heavy for any kind of quick deployment, but it was never intended for it anyway. Needless to say, this is a luxury that the British Army, with its active global participation in multilateral operations, cannot afford.

Living with the times

Large heavy howitzers are no longer suitable to the UK’s current doctrine, although they were a perfectly valid choice at the time they were chosen. The UK is now engaged, alongside France and the United States, more than with NATO itself, in the business of keeping a rapid, scalable, and powerful force on permanent global standby, so as to act as a deterrent for local destabilization. Researcher Kenton White writes: “While the relationship between North Atlantic Treaty Organisation and the UK during the alliance’s seventy-year history hasn’t always been smooth, the country’s main political parties have always shown strong public support for it.”  In order to embody this modern doctrine of re-engaging with its U.S. partner, British equipment must reunite with its past expeditionary past. Tanks must be set aside, at least in their current form, and the focus must be put on lighter, more air-deployable, and more maneuverable units, so as to leave no safe haven to insurgent units. Military equipment must be sufficiently cheap to be purchased in deterring numbers, despite contracting military budgets and to be quickly replaced in case of high-attrition conflicts. Their design must find a fine balance between the practical capacities which modern technology has to offer, and excessive sophistication which performs poorly in the test of fire. The Anglo-French military readiness force, the Combined Joint Expeditionary Force (CJEF), relies on French and English capacity to deploy combat-ready battlegroups anywhere in the world. As the main, if not only, deterring force in Europe, the CJEF, therefore, needs both its partners to purchase its equipment accordingly, in order to achieve interoperability. The UK Ministry of Defence writes that “The force has reached full operating capacity and can now rapidly deploy over 10,000 personnel in response to a crisis to fulfill a range of tasks including high-intensity operations, peacekeeping, disaster relief or humanitarian assistance,” a feat which no EU force is able to match.

The British Army is currently considering replacing its artillery regiments. What to choose? And, more to the point: how to choose? Defense expert Tom Bailey writes: “The British Army will soon begin the phasing out of its AS-90 Vickers artillery, which is nearing the thirty-year mark. With shifting types of warfare and important evolutions in technology, the replacement will require much scrutiny from the general staff.” This “time-to-upgrade” is not merely a replacement chore, it is the opportunity to acquire equipment which is more “in line” with Britain’s current challenges. The current howitzers of the Royal Army are track-mounted, which is suitable for defensive settings. A heavier configuration, they provide excellent resilience to attacks and slow mobility in all conditions, on the flat plains of the homeland. But Britain may opt for a more suitable configuration, given the type of mission it is called to in the future: wheel-mounted solutions. These lighter and more mobile configurations open up options that are systematically called upon in modern-day missions: mobility, transportability, and interoperability. Because these systems are lighter, they can be transported by air, whereas tracked howitzers are limited to ground and sea transport to reach their battlefields.  Moreover, as tracked artillery cannons are unable to operate in mountainous areas, this makes them suitable only for certain deployments, not all. Wheel-based tubes can operate in all places, as they showed clearly in the inaccessible regions of Afghanistan, for instance, or Mali, with the Nexter Systems’ CAESAR self-propelled howitzer.

The Falklands War, although it awarded victory to the British, served as a sharp reminder of the paradigm of expeditionary forces. Every mile of projection will diminish firepower and military capacities, to the point that England and Argentina, though with extremely uneven nominal forces, found themselves on a rather level playing field. England’s true strategic allies are France and the United States, both of which need high-readiness expeditionary capabilities to achieve their modern-day missions. London is therefore facing the opportunity to tighten ties with its allies and remain on the front of the global security scene but must do so rapidly.