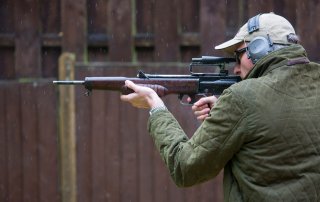 The EM-2 rifle was introduced in 1951 and had some pretty unique features. As this period video explains, the EM-2 was easy to use, had a high rate of fire, and good stopping power.

The bullet it was chambered in was intended to replace the venerable, but ancient .303 British, first introduced into British service in 1889. The intermediate .280 British, as the rifle cartridge was known, as had a few advantages over its predecessor.

During the Second World War, Allied troops had come up against the German StG 44, the first assault rifle. The StG 44 was chambered in the relatively small 7.92 mm Kurtz round. The Kurtz was more powerful than a pistol cartridge, but much more controllable during fully automatic fire than more powerful full-sized rifle cartridges.

Realizing that the rimmed .303 British was too powerful for fully automatic fire, British gunsmiths designed the .280. Design requirements were stringent. The .280 had to have performance equal or superior to a rifle round, but with considerably less recoil to be more manageable in fully-automatic shooting.

The rifle itself was also a radical departure from typical gun design. It was bullpup-style configuration, which meant that magazines were reloaded from behind the trigger assembly. This gave the weapon a very compact layout. It had an overall shorter length, despite a relatively long barrel length for an assault rifle. As a consequence, the EM-2 was more maneuverable in confined spaces, despite having a nearly 25-inch long barrel.

Problems arose when the rifle was tested in the United States. Post-war, there had been a push for ammunition and equipment standardization for NATO Alliance members to simplify logistics and interoperability. While the Brits were in favor of their own .280 British round, the United States wanted a more powerful round that had similar performance as the cartridge that helped win World War II, the powerful 30 caliber .30-06. They settled the debate quite straightforwardly—in a shoot-off.

After the shooting was done, there was a bit of disagreement. The Americans said that the .280 was underpowered—the Brits contended that the 7.62x51mm round was too powerful and uncontrollable during fully-automatic fire. Despite the lack of consensus, the 7.62x51mm won and became the standard NATO cartridge, though the British assertion that the American cartridge was too powerful would be proven correct.

The post-war American M14 rifle chambered in NATO-standard 7.62x51mm ammunition had an unmanageable amount of recoil during fully-automatic shooting, and phased out of active service after less than a decade of duty. Its replacement, the M16, used the smaller—and vastly more controllable 5.56x45mm round which would also become a NATO standard. Sadly, the EM-2 was relegated to the history books and this article.

In 1987, the Brits revisited the bullpup design with their controversial SA80 bullpup rifle, also chambered in 5.56x45mm NATO. The United State is also revisiting bullets with .280-like characteristics. It seems both countries are going back to the future.