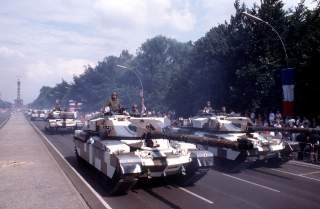 The British Army in late February 2020 handed over, to German authorities, its last remaining headquarters in Germany.

The handover of the headquarters at Bielefeld in northwest Germany signalled the final dismantling of what once was a powerful ground force.

"Today I think, not only for me but for the British forces as a whole, means the end of an era,” Lt. Col. Tony Maw, commander of the British Army’s Germany Enabling Office, said in an official statement.

In the final decades of the Cold War, the British Army of the Rhine, or BAOR, oversaw more than 160,000 British troops in three divisions comprising I Corps. A fourth division, based in the United Kingdom, rapidly would reinforce the corps during wartime.

The four divisions combined possessed 12 front-line tank and infantry brigades. All together, I Corps in the late 1980s could field around a thousand Chieftain and Challenger tanks plus thousands more infantry fighting vehicles, howitzers, rocket launchers, air-defense systems and trucks.

The corps’s likely opponent during the Cold War was the Soviet 3rd Shock Army, one of the most powerful armored forces that ever existed. In the late 1980s the 3rd Shock Army, based in Magdeburg in East Germany, with its four tank divisions could deploy more than 1,500 plus no fewer than 400 artillery pieces.

NATO’s plan, honed over decades, was for a layered defense against the approaching Soviet force, as historian Hans Boersma explained in a document he posted on his website.  “Firstly, a screening force would delay the Soviet advance allowing the armored divisions to prepare their defensive positions and confirm the axes of advance.”

“Thirdly, 3 Armd Division was to the rear and would strike to defeat the Soviet second echelon and seize the initiative. This strike to defeat mission explains why the striker in 3 Armored Division’s recce regiment (9th/12th Lancers) were grouped into a single squadron whilst in the screening force recce regiments they provided a troop in each squadron to provide overwatch.”

“Finally, 2 Infantry Division defended the corps’s rear area with responsibility for the River Weser as a backstop.”

The battle would have been apocalyptic even if it didn’t escalate into a nuclear exchange. Many veterans of the BOAR, reacting to the February 2020 headquarters handover on Twitter, noted that their units expected to last just two or three days in combat with the Soviets.

I Corps trained like its, and Europe’s, survival depended on it. “I arrived in BAOR in 1989,” army veteran Philip Ingram noted in a tweet. “My unit was to relieve the covering-force battle with emergency resupply and battle repairs and medevac, before the main defensive battle. I knew where my trench and arcs of fire were -- planning was detailed!”

It’s worth pointing out that British Army contingency planning in 2020 still involves a possible defense of Europe in the event of war with Russia. British Army units would cross the English Channel as the conflict escalated.

Of course, as American think-tank RAND reminded readers in a February 2020 report, permanently forward-based ground forces are much more effective in deterring war than are forces that deploy as a crisis develops.