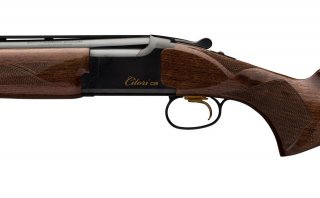 Produced by B.C. Miroku of Kochi, Japan; the White Lightning has been a staple over-under shotgun for the better part of forty years. Let’s see what it has to offer.

At 50 yards, the accuracy of the lower barrel tended to impact about 3 to 5 inches above target. In comparison, the upper barrel shot with dead-on accuracy at a human-sized target, impressing me greatly. Many over-under shotguns don’t always excel at accuracy, but the White Lightning absolutely knocked this out of the park!

This shotgun was far more accurate than many semi-auto shotguns on the market currently, and built for exceptional accuracy. Speaking of accuracy, if you’re looking for an optic, I’d check out my guide on the best shotgun scopes.

Even on a damp and chilly spring day, the White Lightning had no issues great or small despite being in the outdoors for more than six hours. It’s tight breech seal also assures no malfunctions regardless of conditions!

During firing, however, I loved the White Lightning as its design and sleekness make it feel like a competition gun in your hands. Being easy to turn and aim, it’s ideal for game hunting and skeet shooting.

Coming in at 4.5 pounds trigger pull, this is extremely easy to shoot despite being an over-under. I found no aftermarket trigger to even be necessary as the current pull is perfectly balanced for a shotgun of any kind, and why fix what isn’t broken?

Perhaps the best feature of the White Lightning’s trigger is just how smooth it is. There’s not one bit of grittiness or hesitation on this trigger and is easily the best trigger I’ve experienced on any shotgun.

Holding one round per barrel, the obvious downside is the extremely low ammo count. Not only does this equate to more frequent reloading, but also makes it a poor choice for self-defense.

Reloading as I mentioned earlier is definitely cumbersome and the breech mechanism requires more carefulness when closing it after reloading. I found this to be quite laborious even as someone who has previously used over-under shotguns, meaning this weapon would likely be very unpleasant to an inexperienced user.

Coming in at 43 inches, the White Lightning is just about standard for most over-under shotguns, as if it was any shorter it would lack balance. I found this to be an ideal length, as it’s not as excessively long like some over-under shotguns.

Weighing 7 pounds, the White Lightning is about one pound heavier than most over-under shotguns, but it’s an almost unnoticeable difference.I did enjoy firing this shotgun due to this slight increase in weight, as it helps combat climb and keeps you on target more often.

For a shotgun, the White Lightning is relatively standard in recoil and is very manageable for any experience-level shooter. With minimal climb and what I felt to be easily controlled recoil, this is a shotgun that won’t fatigue the user and will allow frequent and long-term firing.

At $1,700, the biggest negative to such a finely crafted shotgun is its lofty price. Not only is this unaffordable for most, but it’s also a massive price tag for a shotgun that is limited to hunting and target shooting. If you have the money, it’s a fine piece to own no doubt, and is beautifully made. None the less this gun is top-tier for its class, and the price reflects that.

The White Lightning is easily one of the finest over-under shotguns I’ve fired. It’s extremely reliable, well balanced, and accurate by every metric. The Japanese design also brings a unique stylistic element to it, making this shotgun an aesthetically pleasing firearm. If you have the extra cash laying around, I would highly recommend this shotgun for any collection!