The BT: Russia's 'Hot-Rod' Super-Fast Tanks (Made in America?) 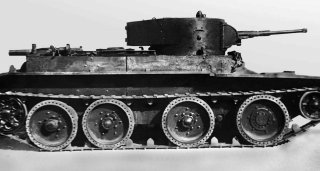 John Walter Christie was a larger-than-life figure. Born in 1865, the New Jersey native built his own cars which he showed off in early-20th century races, becoming the first American to compete in the French Grand Prix, where he debuted with the largest engine ever used. (It conked out after only four laps.)

After being badly injured in a race later that year in Pittsburgh, Christie focused his efforts on developing new vehicles such as front-wheel drive taxis and fire tractors and so forth. As World War I consumed Europe he observed with interest the first tanks deployed by United Kingdom and France. Most of these were lumbering beasts that sometimes struggled to keep up with infantry on foot and routinely broke down after a few dozen miles. Even the relatively mobile French FT-17 light tank could not really exceed 5 to 6 miles per hour!

But Christie didn’t see why a tank shouldn’t be able to go as fast as a car. All you needed as a big enough engine—and a suspension system to match. However, the cantankerous Christie was notoriously unwilling to modify his design concepts to fit U.S. Army specifications—and the conservative Army leadership was already skeptical that tanks would play anything other than a supporting role in future conflicts. Unfortunately, the speed of Christie’s early designs was not matched by good cross-country capability—an important attribute for a battlefield tank.

However, Christie’s Model 1928—built over five years at a cost of $382,000 ($5.7 million in 2020 dollars) finally saw his perfection of the “Christie Suspension.” This circumvented the size limitations of vertical suspensions springs by attaching the road wheel to a horizontal lever which then compresses the spring (see animation here), rather than placing the spring directly above the wheel’s axle with the attendant vertical size problems.

But despite his M1928 displaying impressive speed, Christie could not elicit interest from the U.S. Army beyond the order for a single prototype in 1931. Short on cash, he began marketing his tanks to foreign buyers.

This is where the Soviet Union stepped in—a state not yet recognized by the U.S. State Department! The Soviets nonetheless conducted business in the U.S. through the Amtorg Trading Corporation in New York. Agents from Amtorg arranged a purchase.

Christie then removed the turret and armament from two Model 1928s and shipped them off to the Soviet Union as an “agricultural tractors.”

The UK too expressed interest in Christie's last remaining prototype--which he had mortaged!--as the British Army was drawn to the concept of fast tanks at the time. But, ironically, this time the over £10,000 order was blocked by customs.  Again Christie stripped away the armament and enough systems that his prototype could be labeled as an agricultural tractor. But this time he secretly shipped the turret separately in a box labeled as “grapefruit.”

The British also made extensive use of Christie suspension in their A10, A13 and Convenanter Cruiser cavalry tanks, followed by the more robust Crusader A15 family. These played a major role in the Battle of France and war in North Africa, though proved too thinly armored.

More successful Christie-equipped successors were the Cromwell—the fastest late-war medium tank to serve in large numbers—and the up-gunned Comet, the finest British tank of World War II. But Christie didn’t have any sort of licensing arrangement, and profited not a cent from these later developments.

The two model 1928s were received at the Kharkov Locomotive Factory in Ukraine. There the Soviets wasted no time in creating a reverse-engineered vehicle from the Model 1928 Bystrokhodny (“Fast”) Tank or BT-1, resulting in the domestic BT-2. Three turretless prortotypes in 1931 were followed by production models in 1932 with a turret 37-millimeter gun and a coaxial turret Degtyaryov machinegun. (Some were delivered with an additional two machineguns in the turret instead of the cannon.)

They 10-ton BT-2 was powered by a Mikulin M5-400 petrol engine reverse-engineered from the American 400 horsepower Liberty V12 engine. For comparison, the 18-ton British Valentine infantry tank which entered service in 1940 had only a 131 horsepower engine!

That BT-2’s remarkable power-to-weight ratio resulted in a genuine hotrod. With their tracks removed, the BTs could attain speeds of 62 miles per hour on roads, and around 40 cross-country. A famous recording shows a BT tank leaping a remarkable 40 meters off a ramp. Ironically, however, the neat chain-driving mode appears not to have been used operationally.

The BT received such a warm reception because forward-thinking Soviet Marshall Mikhail Tukhachevsky envisioned a future of large-scale mechanized warfare in which fast tanks played an important role prosecuting a “deep battle.” (Unfortunately for the Red Army, Tukhachevsky was executed by Stalin in 1937 exactly four years prior to the Nazi invasion.)

650 BT-2s were built, but the vehicle had its flaws—it was maintenance-intensive and a gas guzzler. Moreover, its 37-millimeter gun lacked armor-piercing performance and its 6-12 millimeters of armor meant it could potentially be penetrated by rifle or machinegun rounds.

The BT-2 was succeeded by the 11.5-ton BT-5 in 1935 with a redesigned flatter turret mounting a punchier 45-millimeter gun, around 2,000 of which were built.  In 1937, the Soviets shipped off 50 BT-5s to Spain where they easily trounced machinegun-armed Italian and German tanks, but in turn proved vulnerable to anti-tank artillery.

The same year, the Soviets concluded the BT-series with the BT-7, which finally bumped up maximum armor protection to 22 millimeters and featured a sloped elliptical turret design. The two circular turret hatches on the BT’s turret led to it being dubbed the ‘Mickey Mouse’ when both were raised. Both the BT-7 and BT-5 came in radio-equipped command variants and fire support models (the BT-5A and BT-7A) armed with large-caliber but lower velocity 76-millimeter guns. There were even prototype remote-control BT teletanks with flamethrowers!

Nearly 5,000 BT-7s were built. Between September and December 1939, the Red Army in short order used BT-5s and -7s in battles in Mongolia (versus the Japanese), Poland and Finland. In all cases, though the BT’s armament proved effective, thin armor and mechanical unreliability resulted in heavy losses for the relatively expensive and sophisticated tanks.

Thousands of all three BT-series tanks remained in Red Army service when the Nazis invaded in June 1941—and thousands were lost in a few months—despite the BT-5 and-7’s effective armament and genuinely high speed. In part, this was because of the BT’s persisting high maintenance demands coinciding with a breakdown of Red Army logistics and command-and-control in the early months of the war.  But early experience confirmed that in a tactical-level engagement, moving really fast was simply no substitute for adequate armor.

Fortunately, the Soviets had already begun working on a much more ambitious concept evolved from the BT tank. This became the legendary T-34 tank, which in 1941 represented a near platonic ideal combination of armor, firepower and speed. During Russia’s darkest hour in 1941, the T-34’s robustness played a key role in bringing the Nazi invasion to a halt. Even when its defensive-edge faded, the Soviet ability to mass-produce T-34s proved just as decisive.

The small numbers of surviving BT-tanks after 1941 were shunted off to secondary theaters where they continued to see action. As a result, BT tanks in the Far East were still being used in combat in the final chapter of the war when the Soviet Union attacked Japanese forces in Manchuria in August 1945.

Unfortunately for Christie, he never found a way to profit from the technology that was widely adopted in the Soviet Union and the United Kingdom. His designs still had not received U.S. Army orders when he passed away in 1944.