Build to Deter: The Navy Needs More Ships to Take on China 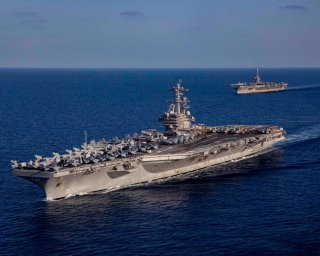 On August 28, the United States sent two Ticonderoga-class guided-missile cruisers through the Taiwan Strait, the first such freedom-of-navigation mission since House Speaker Nancy Pelosi’s visit to Taiwan was met by a large-scale show of force by China. Beijing, of course, protested the sailing. On June 13, the Chinese foreign ministry declared, “There is no such thing as international waters in international maritime law.” Beijing claims that Taiwan is a renegade province, thus making all the waters between it and the mainland an internal waterway.

The United States usually only sends one warship at a time, a destroyer. Sending both the USS Antietam and USS Chancellorsville, the largest surface warships in the fleet except for aircraft carriers was meant to be a strong demonstration of resolve in the wake of Beijing’s live-fire exercises around the self-governing island. China’s state media, however, tried to downplay this, arguing “the US is fully aware of and fear of the PLA's capability so that it needs two warships to accompany with each other to embolden themselves … But the Ticonderoga-class cruiser is a very old warship, and the PLA's Type 055 is much more advanced.” Beijing is also aware that nine Ticonderoga-class ships are slated to be decommissioned. The USS Vella Gulf was in fact taken out of service three weeks before its sister ships sailed through the Taiwan Strait. It had served only twenty-nine years out of its designed thirty-five-year lifespan.

The Navy has tried to justify retiring the cruiser force early because it costs more to maintain older ships, putting a strain on maintenance funding and the capacity of the ship repair industry. Seven of the cruisers are in some phase of a service-life extension and modernization program, which is requiring significant manpower at repair yards, running years late, and costing more than the service budgeted for. “They’re eating us alive in terms of our ability to get maintenance back on track, which is where we need to be,” Chief of Naval Operations Adm. Mike Gilday told a recent conference.

So, the real problem is an inadequate naval industrial base to support a fleet large enough to carry out its global missions and meet the challenge of a fast-growing Chinese navy that seeks to control the Pacific Rim. At risk are the territories and trade of every nation in the region, not just Taiwan. The collapse of the American commercial shipbuilding industry decades ago denies the U.S. Navy mobilization capacity, whereas China has created the largest shipbuilding industry in the world.

According to the recently released Chief of Naval Operations Naval Plan 2022, “To simultaneously modernize and grow the capacity of our fleet, the Navy will require 3-5% sustained budget growth above actual inflation. Short of that, we will prioritize modernization over preserving force structure. This will decrease the size of the fleet until we can deploy smaller, more cost-effective, and more autonomous force packages at scale. The Nation cannot afford to cede influence to China or Russia. Nor can it afford to lose combat credibility.” And that decrease already calls for decommissioning of twenty-four ships in the FY2023 budget, more than just the cruisers. The “autonomous force packages” will be unmanned vehicles, some with significant firepower, but they will not begin to join the fleet until after 2027.

The Navy has estimated to Congress that expanding the fleet even at the modest pace of Alternative 3, would require an additional $13 billion per year to build, man, and operate a larger fleet. When President Biden issues an Executive Order canceling $300 billion or more in student loans, after enacting a series of spending bills amounting to some $3.8 trillion in additional spending for pandemic recovery, infrastructure, green industry development, and other projects, the Navy’s request seems hardly noticeable. Yet its legislative prospects are uncertain despite the bipartisan consensus on the China threat.

Warships are not just procured; they need to be built, which brings the industrial base back to the center of discussion. In 2019, I wrote a piece for the U.S. Naval Institute that went beyond concern for backlogs in repair and maintenance to point out that there was no excess capacity to handle battle damage if the Navy actually had to engage in sea battles for the first time since World War II. None of these problems have been remedied in the years since and there is even now a question of whether a larger fleet can be built, let alone maintained.

On August 25, Admiral Gilday stated that “We have an industrial capacity that’s limited. In other words, we can only get so many ships off the production line a year. My goal would be to optimize those production lines for destroyers, for frigates, for amphibious ships, for the light amphibious ships, for supply ships.” Gilday noted that he wanted to produce three destroyers and two or three submarines a year, but there are doubts that there is room for a third destroyer or submarine at U.S. shipyards. This is not a new problem. Much work was done in 2017 calling for new investment in shipyard capacity for construction and maintenance. Human capital is also needed as the shipyard workforce is aging. Shortages in skilled labor are an economy-wide problem but deserve special public attention when it impacts national security.

Newport News Shipbuilding and Virginia Peninsula Community College have teamed up to offer a program to foster solid careers in a strategic field that can provide satisfaction beyond a paycheck. More such programs should follow across the country as the supply chains for the defense industry are national. Yet, even if the needed increases in training, innovation, and funding are forthcoming, it will take years to send more warships to sea.

This is why it seems so risky to decommission major warships when short-term dangers loom. Beijing is watching closely for a moment when the balance of power in the Indo-Pacific shifts enough to offer an opportunity to strike. Peace depends on deterrence and deterrence depends on the capabilities that exist each day, not a decade or two from now. The Ticonderoga-class cruisers may not be the most modern warships but they still pack a punch with 122 missile cells plus additional launchers for Harpoon anti-ship missiles and torpedoes. Its Aegis radar needs an upgrade but is still better than most of what anyone else has afloat. Best of all, it exists and can hold the line until something better comes along to take its place rather than leave a void the Chinese will try to exploit.