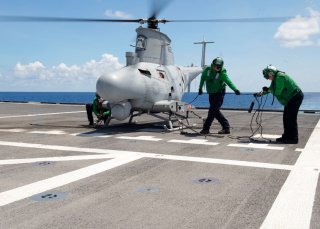 The Chief of Naval Operations’ Navigation Plan 2022 sets the ambitious goal of developing a 500-ship fleet with as many as 150 unmanned systems, a concept intended to leverage breakthroughs in autonomy, artificial intelligence (AI)-enabled computer processing, data networking, and manned-unmanned teaming.

Maritime warfare is expected to be more dispersed and driven by breakthrough weapons and sensors with greater range, precision, and data-transmission capabilities. Unmanned systems and cross-domain air, surface, and undersea networking form the conceptual basis of what could be called a transformation.

“This transition will rebalance the fleet away from exquisite, manpower-intensive platforms toward smaller, less-expensive, yet lethal ones,” the plan noted.

Unmanned systems can conduct clandestine surveillance and reconnaissance missions and function as sensor nodes within a larger multi-domain meshed warfare network. Advanced algorithms are allowing much greater degrees of collective or collaborative autonomy such that groups of unmanned systems can now operate in tandem with one another and adjust to changing combat variables in real-time. The Navigation Plan 2022 interprets drones the same way, as they are described as critical for rebalancing the fleet by expanding its size while saving money and simultaneously improving lethality.

The plan explained that “This transition will rebalance the fleet away from exquisite, manpower-intensive platforms toward smaller, less-expensive, yet lethal ones.”

The massive expansion of drone use is consistent with the U.S. Navy’s Distributed Maritime Operations (DMO) strategy which calls for a dispersed but highly networked force of manned and unmanned systems able to share time-sensitive targeting and reconnaissance data in real-time. The networking is also intended to be multi-domain to connect undersea drones with surface ships and air assets such as helicopters lowering mine-and-submarine-hunting sonobuoys into the water.

Greater numbers of unmanned systems support the strategic call for “distributed” operations in keeping with the services’ DMO strategy, as less condensed maritime forces are a small target for enemy forces.

A key reason for the greater number of unmanned ships is due to the technological ability to operate with a kind of “collective autonomy” where multiple drones share information in real-time, process and analyze incoming data in relation to one another and other variables, and then execute an operation in a collaborative or “collective” way.

This concept has been in development with the U.S. Navy for many years, going back to an Office of Naval Research program known as Ghost Fleet. The Overlord (or Ghost Fleet) program has been achieving breakthroughs in coordination and multi-domain data sharing for several years now.

The concept is to extend the premise of autonomy beyond the operations of a single vessel to enable a coordinated collective action where unmanned systems share and analyze information among themselves to make course corrections.

The more groups of unmanned systems can respond to new information, the greater the impact drones and autonomy will have on operational effectiveness and high-speed command and control.