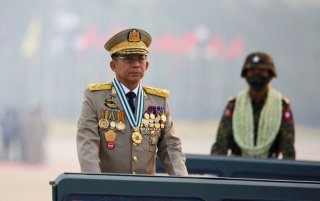 In celebration of Myanmar’s traditional New Year holiday, the governing military junta of Myanmar announced that it will release 1,600 prisoners from jails as part of a general amnesty—but it conspicuously declined to release those who had been imprisoned for protesting against the junta following its February 2021 coup d’etat.

Myanmar’s most prominent prisoner is former state counsellor and de facto leader Aung San Suu Kyi, who has been moved from house arrest to a prison facility in Naypyidaw, the country’s capital. The junta has made no indication that she would be released; it also declined to comment on the status of Sean Turnell, Suu Kyi’s Australian economic adviser, who is imprisoned in the country’s notorious Insein Prison near Yangon.

Lt. Gen. Aung Lin Dwe announced the amnesty, claiming that it had been instituted “as part of the celebration of Myanmar’s New Year, to bring joy to the people and address humanitarian concerns.” As part of the amnesty, he announced that 1,619 prisoners, including forty-two non-Burmese citizens, would be released. A spokesman for the country’s Prisons Department later indicated that the prisoners slated for release had largely been convicted of petty crimes, particularly those related to illegal drugs, rather than political offenses.

In the protests following the military coup, at least 13,000 Burmese citizens were arrested, according to the Assistance Association of Political Prisoners, a Burmese human rights organization. 1,756 demonstrators were reportedly killed by pro-military security forces over the same period.

Although protests in Yangon, Myanmar’s largest city, have largely ended following a military crackdown, the takeover has been met with heavy resistance in other parts of the country, particularly in ethnic minority regions that have effectively seceded from the central government. Some Western experts have argued that the violence between the Burmese military and separatist movements constitutes an insurgency or a civil war, although the military government disputes this.

The current amnesty program is the second such initiative launched by the military government. In April 2021, amid massive protests against the government, around 23,000 people were freed from Burmese jails.

Burmese opposition leaders expressed doubts that political prisoners would ultimately be released from prison, as leaders of the military junta expect them to resume their participation in opposition activities upon release.