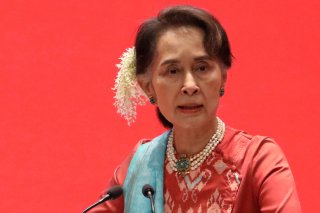 Aung San Suu Kyi, the controversial former leader of Myanmar (Burma) who was ousted by a military coup in February 2021, was sentenced to four years in jail on Monday on charges that the country’s opposition has decried as baseless and politically motivated.

The former State Counsellor was sentenced by a Burmese court to serve her sentence in detention at an undisclosed location. The four-year prison term was halved after a partial pardon from Min Aung Hlaing, the coup’s leader and current de facto head of state, according to the state-run television channel.

Suu Kyi was sentenced alongside Win Myint, Myanmar’s president from 2018 until the 2021 coup. Although he acted as the country’s head of state, Win Myint was widely viewed as a figurehead for Suu Kyi, who was explicitly barred from the office of president in the country’s 2008 constitution; he also received a four-year prison term, which was subsequently reduced to two years.

Zaw Min Tun, a spokesman for the Burmese military junta, claimed that Suu Kyi and Win Myint had been convicted of inciting protests against military rule, which have led to more than one thousand deaths since February and nearly five thousand arrests. The two were also convicted of violating coronavirus rules, and Suu Kyi was separately charged with violating telecommunications and import-export laws.

The pair have denied all the charges, and their supporters have argued that they are intended to end their political careers and weaken the NLD, allowing the military to consolidate its power over the objections of pro-democratic protesters.

Suu Kyi, 76, rose to prominence in 1988 as one of the leaders of the newly-formed “National League for Democracy,” a Burmese pro-democracy movement that helped to oust longtime dictator Ne Win. Although the NLD won 80 percent of the seats in the country’s 1990 parliamentary elections, the results were annulled by the military, and Suu Kyi was placed under house arrest for the next twenty years. In 1991, while in captivity, she was awarded the Nobel Peace Prize.

Suu Kyi was released in 2010 and led the NLD to a landslide victory in the country’s 2015 election, becoming Myanmar’s effective leader the following year. However, her reputation abroad was tarnished by a perceived failure to confront the abuses of the Burmese military during the 2017 Rohingya refugee crisis. Some activists called on the Norwegian Nobel Committee to rescind her Nobel Peace Prize, which the committee ultimately declined to pursue.

In spite of the Rohingya controversy, Suu Kyi remained personally popular in Myanmar, leading the NLD to another major victory in the country’s 2021 election prior to the military coup.