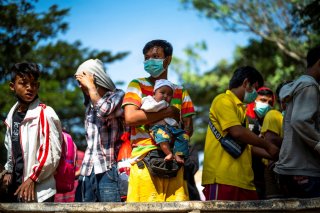 That nonprofit, Save the Children, reported that two of its workers remained missing in Myanmar’s Kayah state. The vehicle the aid workers were traveling in was attacked and burned by government troops, according to local sources.

“I condemn this grievous incident and all attacks against civilians throughout the country, which are prohibited under international humanitarian law,” Griffiths said in a statement.

“I call upon the authorities to immediately commence a thorough and transparent investigation into the incident so that perpetrators can be swiftly brought to justice.”

The UN official separately called on both the Myanmar Armed Forces, whose leaders have run the country since February 2021 and the various Burmese rebel groups that have opposed them to protect civilians from harm.

The United States Embassy in Burma claimed that it was “appalled by this barbaric attack,” which it noted had killed women and children, in a statement on Twitter.

“We will continue to press for accountability for the perpetrators of the ongoing campaign of violence against the people of Burma,” the statement read, using the country’s former name in accordance with State Department policy.

More than 1,300 people have been killed in violence related to the February 2021 coup d’etat by the Tatmadaw, or Burmese military, against the elected government of President Win Myint and State Counsellor Aung San Suu Kyi. Months of protests followed the coup, leading to a crackdown by security forces, an increase in rebel activity in the countryside, and subsequent government reprisals targeting civilians.

On Sunday, photos circulated on social media depicting two burned-out trucks and a car in Hpruso, a township in Kayah. A local anti-government militia leader claimed that his group had inspected the scene and found the bodies of 27 people, according to AFP.

The Burmese government acknowledged that its troops had killed a number of people in Kayah following a clash with anti-government rebels, according to government spokesman Zaw Min Tun.

Save the Children indicated on Saturday that two of its staff members in Myanmar had been traveling home through Kayah and had been “caught up” in the incident. It has since temporarily suspended work in several regions in Myanmar, according to a statement released by the group.