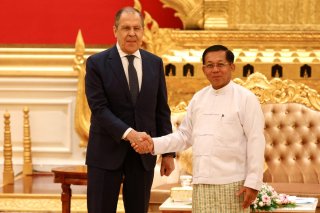 Russian foreign minister Sergey Lavrov arrived in Naypyidaw, the capital of Myanmar (Burma), on Wednesday, according to Russia’s state-run TASS news agency. This marks the most recent engagement between Russia’s top diplomat and Myanmar’s military government, which seized power from the democratically-elected government of President Win Myint and State Counsellor Aung San Suu Kyi in February 2021.

Lavrov and Burmese leaders are scheduled to discuss Myanmar’s internal security, as well as it's economy and bilateral Russian-Burmese relations, according to TASS. In his meeting with Burmese foreign minister Wunna Maung Lwin, the Russian foreign minister gave no indication that the Kremlin’s good relations with Myanmar would change, describing it as a “friendly and longstanding partner” of Russia and insisting that the two nations had “a very solid foundation for building up cooperation in a wide range of areas.”

“We appreciate the traditionally friendly nature of our partnership,” Lavrov said during the meeting, adding that the two countries' relationship would not be “affected by any opportunistic processes” driven by current events.

Lavrov’s visit comes as Myanmar’s military junta has grown increasingly isolated around the world. The military coup, led by junta leader General Min Aung Hlaing, was widely condemned abroad and led to the suspension of aid to Myanmar and the imposition of sanctions by the West. At the same time, hundreds of thousands of protesters affiliated with the National League for Democracy, Myanmar’s ruling party at the time of the coup, have joined demonstrations against the military government. Following a crackdown on peaceful demonstrations in the country’s major cities, a handful of rural insurgent movements against the junta have grown in strength, leading to additional civilian casualties and prompting the United Nations to open a war crimes investigation into Myanmar’s government.

At least two thousand Burmese civilians have been killed since the start of the protests, and another four, including a former member of parliament, were executed by the government last week for their participation—marking the first use of the death penalty in Myanmar since the mid-1980s.

Following his visit to Myanmar, Lavrov is scheduled to attend the annual ASEAN summit in Phnom Penh, Cambodia, which currently chairs the group. Myanmar has been banned from the summit for its failure to implement the “five-point consensus” committing the junta to peace and an eventual return to a civilian government.