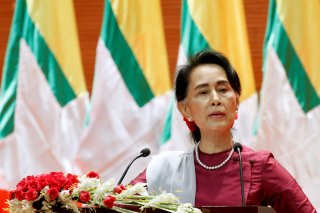 Aung San Suu Kyi, the former state counsellor and de facto leader of Myanmar (Burma) until her overthrow in a military coup in February 2021, was transferred earlier in the week from a secret detention facility to a military prison in Naypyidaw, the country’s capital, according to the BBC.

“In accordance with criminal laws, [Suu Kyi] has been kept in solitary confinement in prison” since Wednesday, a statement issued by military spokesman Zaw Min Tun read.

Following the coup, Suu Kyi and Burmese president Win Myint were deposed and initially placed under house arrest. The following year, after a pair of criminal trials widely criticized abroad as a farce, both leaders were sentenced to prison terms. Prior to her transfer, Suu Kyi had been imprisoned at an undisclosed location, widely suspected to have been a Burmese military base; in that location, she had had several helpers at her disposal and a dog, according to an anonymous official with knowledge of her whereabouts.

The official described Suu Kyi as being “in strong spirits” and noted that “she is used to facing any kind of situation calmly,” according to AFP.

Suu Kyi rose to prominence in Myanmar after helping to organize the country’s “8888” uprising on August 8, 1988, a series of nationwide protests that forced longtime dictator Ne Win from power. Two years later, Myanmar’s first free elections were held, in which Suu Kyi’s National League for Democracy (NLD) won a decisive victory; however, the country’s military refused to recognize the results and placed Suu Kyi under house arrest for the next two decades. Following her release in 2010, Suu Kyi led the NLD to a landslide victory in the country’s 2015 elections. Although she was denied the presidency by a constitutional rule thought to have been placed specifically to exclude her from power, she was made state counsellor, a position roughly equivalent to that of a prime minister, and continued to lead the NLD.

Following the coup d’etat, the military junta cracked down on widespread protests against its seizure of power, leading to a growing death toll and spawning numerous insurgent movements in the country’s borderlands. Tom Andrews, the UN’s special rapporteur on human rights in Myanmar, observed on Thursday that the Burmese military was now estimated to have killed 2,000 civilians.

“Junta forces have killed more than 2,000 civilians, arrested more than 14,000, displaced more than 700,000, driving the number of internally displaced persons well over one million, and plunged the country into an economic and humanitarian crisis that threatens the lives and wellbeing of millions,” Andrews said in a statement. “The military’s attacks on the people of Myanmar constitute crimes against humanity and war crimes. No one has been spared the impact of the military’s violence.”

“Too much is at stake for Myanmar and its people to accept complacency and inaction by the international community,” he added.