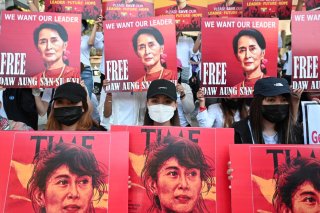 A Burmese military court sentenced Aung San Suu Kyi, the former de facto leader of Myanmar (Burma), to an additional four years in prison on Monday for importing and possessing “illegal communication devices” and violating COVID-19 restrictions, according to an anonymous legal official involved in the trial.

The four years that the Burmese stateswoman received will be added to her existing two-year prison sentence, which was originally set to last four years before being reduced by General Min Aung Hlaing, the country’s military leader.

Suu Kyi, aged 76, served as the country’s state counsellor, a position equivalent to a Western prime minister, prior to a coup d’etat on February 1, 2021. That position was created for her after she was explicitly barred from acceding to the presidency by the country’s military-approved 2008 constitution.

The verdict was not publicized by the military government of Myanmar, which held the trial’s proceedings entirely in secret and restricted access to journalists and spectators. Suu Kyi’s lawyers were served with gag orders after releasing information to the press during last year’s trial.

The recent verdict was ultimately released by an anonymous legal official involved in the case. That official claimed that the former leader was sentenced to two years for illegally importing walkie-talkies and an additional two years for allegedly violating COVID-19 restrictions prior to the country’s November 2020 election.

The 2020 election resulted in a landslide victory for the National League for Democracy (NLD), Suu Kyi’s party, further expanding its governing majority. However, members of the opposition Union Solidarity and Development Party (USDP) and military officials alleged voter fraud in the weeks before the coup. Most Western observers discounted the allegations.

Suu Kyi currently faces around ten other charges including participation in the alleged voter fraud and violating the country’s Official Secrets Act. If found guilty on all counts, she could face an additional 100 years in prison.

The Burmese leader’s lawyers and supporters within Myanmar, as well as many Western analysts, describe the charges as fraudulent and politically motivated.

The coup has been the subject of ongoing demonstrations since February. After a military crackdown on protesters that led to around 1,400 deaths, violence in the country’s periphery increased and support for separatist movements grew.