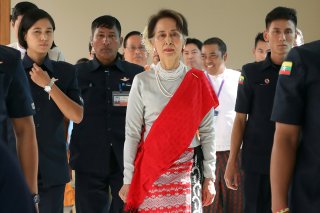 The military junta governing Burma announced on Thursday that it had filed an additional corruption charge against former Burmese state counsellor Aung San Suu Kyi, the eleventh active indictment against the country’s de facto leader prior to the February 2021 military coup.

The announcement came two days after the one-year anniversary of the military coup. Large-scale protests against the coup have continued. However, following a military crackdown, many demonstrations have morphed into riots and in some cases open rebellion, particularly in Myanmar’s border areas.

At roughly the same time that the additional charge was announced, Burmese troops reportedly launched attacks against civilians in Myanmar’s northwestern Sagaing region, burning as many as 400 homes and leading to the displacement of thousands of civilians.

The additional corruption charge stemmed from Suu Kyi’s alleged acceptance of a $550,000 donation intended for a charity foundation, according to the junta’s spokesman.

Suu Kyi, a former human rights activist, became one of the world’s most high-profile political prisoners from 1989 to 2010 when she was placed under house arrest by a previous military junta. Following her release, she contested the country’s 2015 elections, in which her National League for Democracy (NLD) party decisively defeated Myanmar’s pro-military faction and won a supermajority of seats. Although a provision in the country’s constitution—a provision most observers suspect was created specifically for her—prevented her from assuming the country’s presidency, she assumed the office of state counsellor, a position analogous to a prime minister within a parliamentary system.

Despite controversy over her tepid response to ethnic cleansing attacks by Burmese soldiers against the country’s Rohingya Muslim population in 2017, Suu Kyi remained widely popular and won reelection in 2020 by an even larger margin than in 2015. However, that election was annulled, and the parliament was dissolved by the military junta following its takeover.

Previous convictions against Suu Kyi have included alleged violations of COVID-19 social distancing restrictions, inciting protests against the military, and breaking the country’s telecommunications law by allegedly importing illegal “walkie-talkie” radio transceivers. She has also been accused of treason for breaking the country’s Official Secrets Act.

The former leader has remained under house arrest throughout the ongoing legal process, although she is expected to be transferred to a formal jail once it is complete.