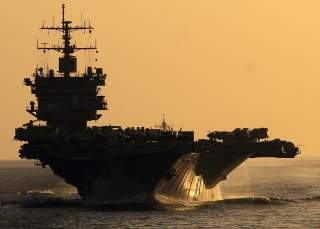 Besides speed, hypersonic missiles are also destabilizing because of their altitudes and maneuverability. With regards to the former, HGVs travel at altitudes lower than ballistic missiles while HCMs fly higher than traditional cruise missiles. In both cases, this limits the ability of traditional missile defense systems to shoot them down.China recently tested a new hypersonic vehicle.

“China has successfully developed and tested a cutting-edge hypersonic aircraft that rides its own shock waves,” the state-run China Daily reported on August 6th.

The test was conducted by China Academy of Aerospace Aerodynamics, part of the contractor China Aerospace Science and Technology Corp, on August 3rd. It appears to be the first test of the Starry Sky 2, a hypersonic experimental waverider vehicle, or at least the first acknowledged one.

“A waverider is a hypersonic aircraft that has a wedge-shaped fuselage designed to improve its supersonic lift-to-drag ratio by using the shock waves generated by its own flight as a lifting force,” the China Daily article explained.

There are two basic types of hypersonic missiles. The first are called hypersonic glide vehicles (HGVs) and are characterized by being launched into the atmosphere from a rocket and gliding to their targets at low altitudes.

These HGVs typically fly at faster speeds than the second type of hypersonic missiles, called hypersonic cruise missiles (HCMs). As their name suggests, HCMs are cruise missiles that fly at hypersonic speeds. During their entire flight, they are powered by rockets or high-speed jet engines like scramjets.

The waverider is an HGV and is first carried by a solid propellant missile before separating and using its own propulsion system. The independent flight carried about by China lasted four hundred seconds and reached a maximum speed of Mach 5.5 to 6 (4,200 to 4,600 miles an hour).

Chinese media reports said the waverider reached an altitude of 30 kilometers and maneuvered during flight. China Daily added that “The vehicle also tested a host of advanced technologies such as a domestically developed heat-balance thermal protection system.”

Boeing’s X-51A hypersonic vehicle was also a waverider that used a scramjet engine. As Kyle Mizokami pointed out, the state-run Chinese media did not specify the type of engine Starry Sky 2 used.

Notably, this test marked the first time China has confirmed it was developing a waverider. The state-run media said it had been in development for the last three years.

This is hardly China’s first entry into the budding hypersonic missile race. Between 2014 and 2016, Beijing conducted at least seven tests of the DF-ZF hypersonic glide vehicle. Beijing did at times confirm international reports about these tests but provided few other details.

“The missile is explicitly designed for operational HGV implementation and not as a test bed,” a source familiar with U.S. intelligence reports told Panda at the time. The same source noted that this was “the first HGV test in the world using a system intended to be fielded operationally.”

It’s unclear if this most recent test used the DF-17.

China, Russia, and the United States are the three countries leading the way in developing hypersonic missiles. One Chinese commentator said that the Starry Sky 2 test “showed that China is advancing shoulder to shoulder with the US and Russia.”

A 2017 report by the Rand Corporation argued that hypersonic missiles are uniquely destabilizing due to several characteristics.

The first, of course, is their incredible speed, which compresses timelines for adversaries to react as well as reducing the effectiveness of defensive systems.

Besides speed, hypersonic missiles are also destabilizing because of their altitudes and maneuverability. With regards to the former, HGVs travel at altitudes lower than ballistic missiles while HCMs fly higher than traditional cruise missiles. In both cases, this limits the ability of traditional missile defense systems to shoot them down.

This allows them to penetrate ballistic missile defense systems. Arguably more important, the Rand Corporation pointed out, “maneuverability can potentially provide HGVs the ability to use in-flight updates to attack a different target than originally planned…. With the ability to fly at unpredictable trajectories, these missiles will hold extremely large areas at risk throughout much of their flights.”

Put differently, adversaries won’t be able to determine the actual target of the attack until closer to when the missile hits. Indeed, at a breakfast in Washington, DC on August 10th, General Paul Selva, the Vice Chairman of the Joint Chiefs of Staff, said that hypersonics gliding over parts of the country could be maneuvered to strike any target in the continental United States.