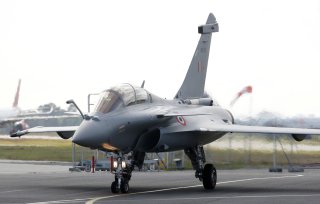 In June, India took an important step toward self-reliance by placing an order for the Astra Mk-1 beyond visual range (BVR) missile. BVR missiles can engage targets beyond a pilot’s visual range, which is typically about thirty-seven kilometers. The Astra Mk-1 has a range of 100 kilometers and a ceiling of twenty kilometers. It has satisfied all the consumers who intend to integrate them into their aircraft, including the Indian HAL Tejas multirole fighter. However, will this new capability give India an edge over Pakistan and China?

Pakistan’s F-16 fighter jets are armed with U.S. AIM-120 advanced medium-range air-to-air missiles (AMRAAM). It is a fire-and-forget active transmit-receive radar guidance weapon with a range of over 100 kilometers capable of traveling at Mach 4 speed. In retaliation to the 2019 Balakot airstrike, Pakistan launched Operation Swift Retort where it fired the AIM-120 AMRAAM at six locations in Jammu and Kashmir.

China’s sights are set on matching U.S. air dominance and their innovations are primarily motivated to achieve comparable, if not superior, aerial warfighting capabilities against the United States. It created the PL-15 missile, an active radar-homing BVR weapon with a 300-kilometer range capable of reaching Mach 4.5. For reference, missiles that can achieve speeds of Mach 5 and above qualify as hypersonic.

To counter such advanced adversaries, it is not enough for India to demonstrate indigenization. There must be a fighting chance with the proper defense forces. Comparing military capabilities to each other in isolation is often moot because real combat involves a variety of factors, such as other equipment and tactics. When Chinese aircraft penetrate Taiwanese airspace, they do not rely solely on their speed and maneuverability but also on electronic measures to render Taiwanese radars useless. If one combines a suite of electronic warfare with BVR missiles, the target is a sitting duck.

India’s Response to Pakistan and China

The Astra missiles were first tested in 2003 as part of the Integrated Guided Missile Development Programme (IGMDP). Astra Mk-1 is an advanced BVR missile that can be launched agnostic to the target’s relative position. It includes advanced electronic countermeasures (ECM), which improve its target tracking capability even in an environment with electronic jammers. It can engage multiple targets and now sports an indigenous RF seeker-based active radar instead of semi-active radar.

The pilot has the option of using “Lock on before Launch” (LOBL) or “Lock on after Launch” (LOAL), allowing the fighter jet to shoot and scoot. It is meant to engage an enemy that fights back. Hence, while most aircraft use up to 9 G forces to outmaneuver missiles, the Astra Mk-1 uses 30 Gs to ensure the endgame objective of an engagement.

The all-weather missile has a range of 100 kilometers and travels at a near hypersonic speed of Mach 4.5. Although its fifteen-kilogram warhead is smaller than the eighteen and twenty-kilogram warheads of the AIM-120 and PL-15, respectively, it has a demonstrated ability to score a direct hit from maximum range.

Recent news reports indicate that the Astra Mk-2 and Mk-3 models are set to be tested in 2023 and 2024, respectively. The Mk-2 variant is said to be an incremental upgrade of the Astra Mk-1 with a 160-kilometer range. It will also have a dual-pulse solid-fuel rocket motor used by the industry standard, Meteor missile, to achieve greater operational range.

The Astra Mk-3 is being developed along with Russia and will most likely have the new Solid Fuel Ducted Ramjet (SDFR) for a range of 350 kilometers. The Astra Mk-3 will afford India a credible response to the Chinese PL-15 and other world-class BVR missiles.

The SDFR was tested in 2019 and 2021 and it is used in the Meteor BVR air-to-air missile (AAM) to boost energy before engagement. This continuous thrust gives it the largest No-Escape Zone at sixty kilometers. The American AIM-120 uses a rocket motor that achieves its kinetic peak first before bleeding energy as it progresses toward its target. This is also the case with the Astra Mk-1.

However, both the Mk-2 and Mk-3 will have an SDFR to ensure maximum kinetic energy is sustained after launch. This will ensure that the target is unable to escape the missile within a certain distance. The AIM-120 has a smaller No-Escape Zone than the PL-15, comparable to the Meteor missile.

As India continues to make strides in missile technology, Pakistan and China should know that they will see a dominant BVR missile in New Delhi's arsenal soon.