Can the Navy Catch Up To Russia and China's Firepower Advantage? 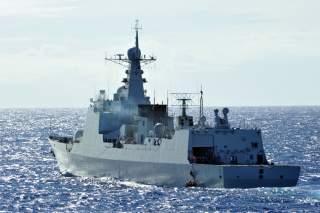 The Navy’s tactical ignorance is built into its arsenal. Currently some of the Navy’s most important weapons development programs are not just evolutionary, but revolutionary in the possibilities they open up. This is not due to innovation, but instead many of these noteworthy and foundational capabilities are finally arriving decades after the technologies were first proven, many close to half a century ago. Many of these most crucial weapons are already in the hands of great power competitors such as Russia and China who have had decades of opportunity to train and refine tactics with them.

“…no captain can do very wrong if he places his ship alongside that of the enemy.” –Horatio Nelson

One of U.S. Navy’s gravest errors in handicapping its own development was neglecting the development of long-range offensive firepower in the age of missile warfare. What made the anti-ship missile a revolution in naval warfare was its ability to deliver a powerful pulse of firepower comparable to that of an attacking wave of carrier aircraft through a combination of high speed, large warhead size, and salvo fires.

In spite of this by 1971 the Soviet Union managed to field 11 different types of anti-ship missiles before the U.S. had yet to field one. Today numerous surface ships, submarines, and heavy bombers in the Russian and Chinese navies carry long-range anti-ship missiles, many with supersonic speed and ranges as great as over 200 miles. It was not until 1977 that the U.S. Navy would field its first anti-ship missile, the Harpoon, which remains its primary anti-surface weapon to this day. Weapons with triple the range and speed of the Harpoon missile already existed in numbers 50 years ago.

The Harpoon is a slow, subsonic missile and extremely short-ranged at around 70 nautical miles. The Harpoon also isn’t equipped by most of the U.S. Navy’s destroyers. It is only found on less than half of the Navy’s destroyers despite there being little difference in the design of the ships that carry them and those that do not.

The submarine force took Harpoon out of its inventory entirely in 1997 which shaved tens of miles off its surface strike range and limited itself to only close-range torpedo engagements. Now the submarine force is thinking about bringing Harpoon back some 20 years later.

Harpoon failed to take advantage of arguably the most important attributes large naval platforms bring to the fight – capacity and staying power. The surface fleet ships that do carry Harpoon only carry eight, a small sum. This is in spite of the fact that all U.S. Navy large surface warships have around 100 vertical launch cells for missiles and where Harpoon is much smaller than launch cell-compatible missiles like Tomahawk.

Because Harpoon is incompatible with its launch cells the Navy bolts the missiles on top of the deck in a most uneconomic fashion. This limits the maximum anti-ship salvo U.S. Navy surface warships can deliver to only an eight-missile salvo with extremely short range and subsonic speed. The Navy certainly expects its own ships to be able to easily swat down such a salvo. Harpoon must be fired via torpedo tubes for submarines, but shooting missiles through torpedo tubes can also only produce small salvos compared to a submarine’s launch cells.

The Navy did come close to effectively fielding a long-range anti-ship weapon. However, the Navy never truly integrated it by only procuring a small quantity and eventually taking it out of the inventory entirely.

Ill-conceived arguments were put forward to justify taking these weapons out, such as how the Navy could not likely target the missile to the maximum extent of its range and the Navy’s current anti-ship missile seekers would be ill-suited to congested waters featuring a mixture of hostiles and non-combatants. However far the Navy could target Tomahawk was going to be far better than what it was getting with Harpoon. The Navy certainly accepted a 200-mile anti-ship missile threat from Soviet forces. And if NATO had gone to war against the Soviet Navy it still could have fought in congested waters such as the Mediterranean and Baltic Seas.

Still, the Tomahawk makes for a relatively poor anti-ship missile. It is subsonic and lacks aerodynamic features that allow for dynamic terminal maneuvering and where both drawbacks will lower its survivability. More missiles would have to be fired per salvo to achieve a similar effect offered by the more modern missiles coming to the fleet like the Long Range Anti-Ship Missile (LRASM) and Standard Missile (SM)-6.

Tomahawk’s best feature is its long range of hundreds of miles which would allow a dispersed force to aggregate their fires into concentrated salvos via networking. However, both slow speed and long range increase the dependence of the missile on in-flight retargeting updates and creates a more burdensome kill chain. It is also questionable to use such a large warhead when modern missile seekers using passive sensors can attempt to pinpoint their strikes on ships. If a missile can confidently choose to hit a ship in the magazine or in other spaces that guarantee a mission kill then missile design can more readily trade warhead size for extra range and speed.

The Navy is once again pursuing this capability. An anti-ship Tomahawk missile will be coming back to the fleet in 2022, 40 years after a Tomahawk first sunk a ship in testing.

One of the most fundamental trends of military capability is that of reinforcing the kill chain, or the process by which targets are found by sensors and then fired upon with weapons. This process requires certain levels of information from simple detection to targeting-quality data. A key challenge is in keeping the kill chain resilient and freshly updated once the weapon is fired and travels a distance to its target. In response to being detected or coming under fire a target can change its behavior and launch decoys which can require new targeting inputs. Arguably one of the most information intensive fights among the warfare areas is the anti-air mission where sustained radar energy must steadily illuminate speedy aerial targets over great distances in order to guide a missile toward a hit.

The difficulty of steadily illuminating a dynamic aerial target can be somewhat mitigated by putting a radar seeker into the missile itself, a capability known as active radar seeking. This adds resilience to the kill chain and gives the missile some degree of independence from external illumination sources such as the radar of a ship or aircraft. Usually active radar seeking is engaged in the terminal phase of the engagement given the relatively small size of the onboard seeker.

Missiles that are totally dependent on outside sources for illumination operate under semi-active homing. The Navy realized the potential of combining both semi-active and active radar homing when it fielded the Phoenix missile through the F-14 Tomcat that was the mainstay of the fleet’s air-to-air capability during its service life. The Phoenix missile could travel 100 miles and engage active radar seeking in the final moments to see the engagement through. The fundamental principle of building resilience into the kill chain by adding an active seeker into the payload itself is also reflected in the many torpedoes that have an active homing capability and in the Aster anti-air missile that is widely used by European navies today.

Aircraft, through adjusting altitude and maneuver, are clearly not as inhibited as warships in illuminating their targets for anti-air engagements. If it made sense to put active radar seekers in anti-air missiles used by aircraft then it should make even more sense for a ship which must contend with the horizon and cannot maneuver in three dimensions like aviation. If an aerial target dives in reaction to being sensed and engaged then an attacking missile could use its active radar seeker to chase the target below the horizon limitation of its illuminating ship in a bid to independently finish the engagement. Such a capability adds extra depth to a ship’s ability to defend itself below the radar horizon and at altitude.