Can This New Warship Help the Marines Dominate the Indo-Pacific? 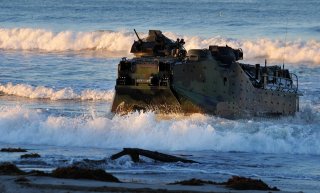 America’s force-in-readiness, the U.S. Marine Corps, is finalizing its plan for the Light Amphibious Warship (LAW), a new vessel that will be the backbone of the Marines’ revamped island-hopping strategy.

The Marine Corps is undergoing significant changes, pivoting from the grinding land campaigns that defined the Corps’ involvement in the Middle East to the Indo-Pacific region. As a part of the Force Redesign 2030, the Marine Corps is returning to its aquatic heritage.

The maritime shift means divesting legacy systems—lots of legacy systems. Following the unofficial mantra of “if it doesn’t swim, it sinks,” the Corps recently divested all tank battalions, citing the vehicle’s inability to operate in a maritime environment. The Corps has also divested from much of its artillery and tube mortar equipment.

The Marine Corps is also slowly accepting the new Amphibious Combat Vehicle into service, replacing the 1970s-era Assault Amphibious Vehicle, a tracked transporter that brings Marines from ship to shore.

In a throwback to the Marine Corps’ island-hopping strategy of World War II fame, the force is restructuring for another showdown in the Pacific. Rather than throwing tens of thousands of Marines at remote specks of land in the Pacific, the Corps empowers smaller groups of relatively independent Marines, backed by a decentralized command structure, to rove around the Pacific.

Looking for targets of opportunity, and not unlike a force of pirates, Marines could undertake what has traditionally been the Navy’s domain: harrying enemy shipping, denying Chinese naval forces the use of land, and even hunting down submarines.

But how will the Marine Corps travel throughout the Indo-Pacific and manage the decentralization that would help make this strategy so lethal? Inside the Light Amphibious Warship.

The LAW will be “between 200 to 400 feet long, roughly 3,000 to 4,000 tons and carry [8,000] to 10,000 square feet of cargo. The primary focus is to enable the maneuver support for the Marine Corps,” said an official responsible for the Marines’ amphibious assault and connector programs explained, as per USNI News.

The LAW will compete for funding against some of the Navy’s most-expensive projects ever, like the new Columbia-class nuclear submarine, and will have to be relatively inexpensive. The Marine Corps would ideally like a price tag of $150 million per LAW hull.

“We’re trying to buy the ship within the budget, but we’re also looking at what are the range of possibilities right now for the different types of technologies, different survivability, recoverability aspects. What does that cost? How does that get into design?” an official explained.

As it stands, the Light Amphibious Warship will prioritize a low crew footprint, current estimates put the crew at fifty-nine. That is a number the Navy would like to decrease without losing capabilities or putting undue strain on the ship’s sailors.