The Marines Are Getting Ready for Amphibious Operations Again 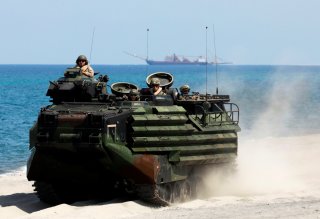 The Corps’ legacy amphibious warships have “all the attributes that we know and love so much over the years that a Marine Expeditionary Unit and Amphibious Ready Group have been using,” Gen. Berger explained, adding that the new Light Amphibious Warship is no substitute for its older, larger counterpart.

Instead, the LAW provides “the tactical mobility to move a smaller element organically that fits this stand-in force approach” that the Marine Corps is pursuing.

The LAW is part of the Marine Corps’ pivot to the Indo-Pacific, a strategy outlined in the Corps’ Force Design 2030 that prioritizes distributed amphibious operations.

The strategy is an enormous shift from the grinding land campaigns that characterized the Marine Corps’ involvement in the Middle East during the past two decades. Instead, the Marine Corps is retooling for a maritime fight and returning to its roots as a land extension of naval power.

Larger amphibious warships can fill many different roles, running “the whole gamut from the deterrence aspect and you can pick your deterrence by denial or deterrence by collection – whichever lens you want to use for deterrence – through crisis response all the way to humanitarian assistance, disaster relief, evacuating people … they do it all,” General Berger explained.

The Commandant added that the large ships are “a floating airfield, hospital, command and control platform and it’s all U.S. sovereign territory that you can move around.” And, their large well deck can hold multiple kinds of payloads, hidden away from prying eyes to keep an enemy guessing.

The Marine Corps’ new Light Amphibious Warship is a high priority alongside the Corps’ larger amphibious ships. But securing enough LAWs won’t be easy. Funding for the ships competes against the Navy’s other budget priorities, like the Columbia-class submarine program. And the Navy has signaled that the program, one of the Navy’s most expensive ever, is their number one priority.