Here's What You Need to Know About the Navy's Amphibious Fleet 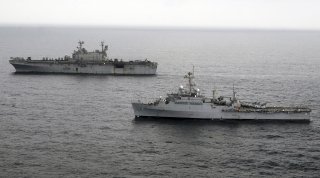 Amphibious ships support Marine amphibious assault landings and operate in lightly contested or uncontested environments due to their lighter weapons complement when compared to other Navy combat ships.

The large storage capacity of these ships can be used to embark Marines and equipment from by helicopter without the need of port facilities onshore.

This, That, and the Other

One of the Navy’s LHDs, the Bonhomme Richard, caught fire while at port in San Diego in the summer of 2020. The ship had been docked for routine maintenance when a fire quickly spread throughout several of its decks in what could be a case of arson.

It took Navy personnel and local firefighters several days to put out the blaze, and the Bonhomme Richard suffered extensive damage. The Navy later determined that the ship should be scrapped rather than repaired, writing it off as a total loss.

Change is in the Air

The Navy has deteremined that a change in fleet structure is necessary as part of its pivot to the Indo-Pacific to counter a burgeoning Chinese naval threat. Rather than a high proportion of large ships like aircraft carriers, large resupply ships, cruisers, and destroyers, the Navy could pivot to a more decentralized force of smaller vessels such as frigates, corvettes, smaller resupply ships, smaller amphibious ships, and perhaps even smaller aircraft carriers.