Why Is This U.S. Navy 'Assault' Ship on Fire? 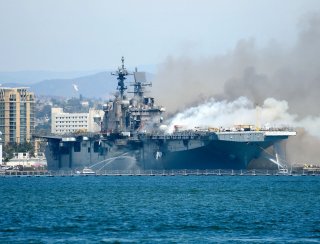 A total of seventeen Sailors and four other civilian personnel sustained non-life threatening injuries while onboard the USS Bonhomme Richard on Sunday. The ship, a Wasp-class amphibious assault ship, was docked at a Navy port in San Diego undergoing scheduled maintenance when the fire started.

The exact cause of the fire is still unknown and being investigated. The remainder of the approximately 160 Sailors onboard are accounted for, and the majority of injuries stemmed from smoke inhalation and heat exhaustion.

It is also unknown when exactly the fire started, although an explosion was heard at 8:30 a.m. The fire started in the ship’s hold, and quickly spread from there. A senior Navy officer, Rear Admiral Philip E. Sobeck, told local reporters that the fire wasn’t started by fuel, oil, electrical problems, or by hazardous materials.

Sobeck termed the blaze an Alpha Class fire, Naval parlance indicating the fire was fueled by paper, wood, fabric, or other non-hazardous materials. Although the USS Bonhomme Richard was carrying fuel at the time of the fire, no munitions other than small arms were onboard and the fuel was not at risk of igniting.

Firefighting efforts are hindered due to the blaze’s location deep inside the ship’s well deck, an area harder to access during a fire, and a place that traps heat, intensifying the fire.

Still, the future of the amphibious assault ship remains ambiguous. Depending on the intensity and duration of the fire, the ship’s steel hull might be irreparably compromised. Evaluation after the blaze will determine the ship’s fate.

The USS Bonhomme Richard is one of the Navy’s eight Wasp-class amphibious assault ships and was commissioned in 1998. The class is designed to support amphibious landing operations both by air and by landing craft. Depending on the aircraft used, the class’ flight deck can launch F-35Bs, Harriers, or a wide assortment of helicopters and tiltrotors.

The class’ large well deck can also transport and launch a number of Marine Corps Amphibious assault vehicles and various other landing craft. The ship’s normal compliment is just above 1,000 sailors plus officers in addition to nearly 1,900 Marines. This particular Wasp is estimated to have cost $761 million.

The USS Bonhomme Richard is one of several Naval vessels to have borne the name, which stems from a pseudonym used by Benjamin Franklin. The original, a merchant-ship-turned-warship was captained by the naval commander John Paul Jones during the American Revolution. The Navy’s currently-serving USS Bonhomme Richard took part in Operation Enduring Freedom, Operation Iraqi Freedom, and a number of humanitarian assistance operations.