Can Russia and Ukraine Negotiate an End to War? 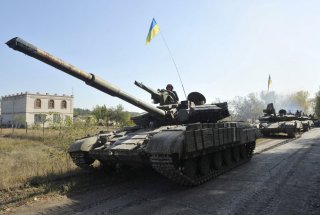 As Russian forces close in on Kiev, the Kremlin seeks to reverse the Euromaidan Revolution and the last eight years of Ukrainian statehood through a Carthaginian peace.

On Thursday morning, Russian president Vladimir Putin announced a “special military operation” in eastern Ukraine’s Donbass region. The announcement came shortly on the heels of the Kremlin’s decision to recognize the Ukrainian separatist Donetsk and Lugansk People’s Republics (DNR and LNR) earlier this week. Putin framed the Ukrainian government as a neo-Nazi “junta” that is “plundering Ukraine and humiliating the Ukrainian people.” Russia cannot stand idly by, he said, as Ukraine vies to become a staging ground for NATO aggression against Russia. Putin said the goal of the operation is to “demilitarize and denazify Ukraine, as well as bring to trial those who perpetrated numerous bloody crimes against civilians, including against citizens of the Russian Federation.”

It was revealed within the next few hours that the Russian operation would not be confined to the Donbass region, but instead involved sweeping cruise and ballistic missile strikes against military assets spread across the country. Russia’s Defense Ministry announced by the end of Thursday that as many as seventy-four “objects of above-ground military infrastructure” in Ukraine had been destroyed, including a dozen airfields, three command centers, and a Naval base. The Russian shock and awe campaign was accompanied by a three-front ground operation: Russian troops began pouring into Ukraine from Crimea, through the eastern separatist territories, and via Belarus. The latter forces seized control of the Chernobyl nuclear plant, a move seemingly driven by Russia’s stated concerns over Volodymyr Zelenskyy’s recent announcement that Ukraine may reconsider prior commitments not to pursue nuclear weapons if the West fails to provide Kiev with sufficient security guarantees.

The air and ground assault resumed in full force on Friday morning, with Russian forces pressing closer to the capital of Kiev amid reports of fierce fighting in the city’s outskirts. Zelenskyy, who alleged on Friday that he is the “number-one target” of an active Russian assassination attempt, previously announced that over 130 Ukrainian servicemen had died and 316 more were wounded.

The specific end goals of the ongoing Russian military action in Ukraine are largely unknown. The Kremlin has repeatedly insisted in prior days that it is not planning to occupy Ukraine; Western military experts have noted that Moscow may not have the resources required to execute a successful long-term occupation even if it wanted to. Experts have suggested that Moscow could be planning to install a pro-Russian government in Kiev while seizing everything east of the Dnieper River; still, others argue that the Kremlin is eyeing Ukraine’s strategically vital Black Sea coast as a forward staging post against NATO’s eastern flank. Among the outstanding questions is whether the Kremlin is considering dialogue with Zelenskyy under any circumstances, or if regime change in Kiev is a non-negotiable part of the Russian military operation. It is likewise unclear if Russia intends to administer any new potential territories directly or through its newly-recognized eastern client states, the LPR and DPR.

Unconfirmed reports emerged earlier this week that Zelenskyy is signaling his willingness to sign what would amount to a surrender agreement with Moscow. The Ukrainian president announced on Friday that he is “not afraid” to enter into wide-ranging peace talks that would include discussions of the country’s “neutral status,” a stark shift from the Zelenskyy administration’s previous vow to seek NATO membership as a core national aim. In a Friday press conference with the heads of the Donetsk and Lugansk separatist republics, Russian foreign minister Sergey Lavrov accused Zelensky of “lying” about his willingness to consider state neutrality. “We offered various options for ensuring security. President [of Russia Vladimir] Putin spoke about that at a press conference following the results of the negotiations with President [of France Emmanuel] Macron. He pointed it out clearly: NATO’s expansion is unacceptable but we want to look for such options through joint negotiations, joint efforts for ensuring security that will guarantee corresponding conditions, corresponding possibilities and requirements for Ukraine, for European countries and, of course, for the Russian Federation,” said Lavrov.  “Therefore, President Zelensky's missed opportunities are well known, and there is no need to fall from a sore head to a healthy one now.”

In remarks given earlier this week, Putin suggested that any potential settlement with Kiev must include Ukraine’s recognition of Crimea as a Russian territory and explicit, binding guarantees never to seek NATO membership. Chinese leader Xi Jinping reportedly told Putin to settle the conflict through “balanced negotiations” in a phone call on Friday. Putin conveyed to Xi in the same conversation that he is ready “to negotiate with the Ukrainian side at a high level,” according to a statement issued by the Chinese Foreign Ministry. But the Russian president struck an uncompromising tone in a Friday address to the Armed Forces of Ukraine (ZSU), describing the government in Kiev as a “gang of drug addicts and neo-Nazis who have settled in Kyiv and taken the entire Ukrainian people hostage.” Putin appeared to welcome the prospect of—If not explicitly call for—a military coup, encouraging the ZSU to “take power into your own hands” and opining that it would be “easier” to negotiate with Ukraine’s top brass than with the Zelenskyy administration.

Kremlin spokesman Dmitry Peskov told reporters on Friday that Belarusian president Alexander Lukashenko is ready to host a platform for prospective peace talks between Moscow and Kiev. "Russian President Vladimir Putin spoke by phone with Belarusian President Alexander Lukashenko, who, for his part, assured that he would be ready to create all necessary conditions for the arrival of the delegations, for ensuring their safety and security, and for holding the mentioned negotiations," he said. But top Kremlin officials, up to and including Putin, continue to insist that Russia’s goal remains the “denazification and demilitarization” of Ukraine, suggesting that Moscow will accept nothing short of Kiev’s total and unconditional capitulation.