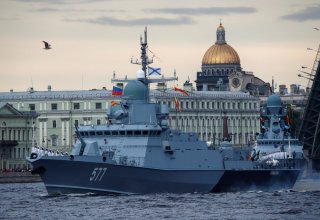 Ukrainian forces are deploying American-designed Harpoon anti-ship missiles near the country’s Black Sea shore in an effort to push Russian ships back out to sea and away from Ukraine’s vital ports.

Ukraine acquired the American missiles from Denmark, according to the Pentagon. The missiles will join Ukraine’s Neptune anti-ship missiles, which are themselves Ukrainian-designed improvements of Soviet-era copies of the American-made Harpoon.

“Our coastal defense was strengthened by highly effective Harpoon complexes,” said Ukrainian minister of defense Oleksii Reznikov on Thursday. “Together with our Neptunes, the Harpoons are already forcing the enemy fleet to keep the distance to avoid the fate of the Russian Black Sea Fleet flagship Moskva.”

Ukrainian forces used their own Neptunes to significant effect, recently sinking the Russian flagship Moskva with dual Neptune strikes. The Russian warship was one of the largest ships to have been sunk during a conflict since the Second World War.

Russian ships are enforcing a blockade of Ukraine’s Black Sea ports, preventing Ukraine’s substantial grain exports from leaving through the ports. Ukraine is one of the world’s most significant cereal exporters, supplying substantial parts of the Middle East, Africa, and Asia with staple grains.

Pundits and online commentators have warned that significant swaths of the world could enter famine-like conditions if Ukraine’s ports are not opened and the waters in and out of the Black Sea are not cleared of undersea mines.

With Russian ships plying the waters off the coast of Ukraine, the blockade continues. However, the addition of American Harpoon anti-ship missiles means that Ukraine may be able to push Russian ships back further than previously possible with just their own indigenous anti-ship weaponry. Still, despite the obvious utility of America’s Harpoon missiles, the Ukrainian minister of defense does not believe they are enough.

“I cannot say that I am satisfied with the tempo and quantity of weapon supplies. Absolutely not. But at the same time, I am extremely grateful to the countries that support us. In particular, to the United States of America, the United Kingdom, Poland and our Baltic friends. And to all other states that help repel Russian evil,” Reznikov said.

“We have already received, bought on the market, manufactured and handed over to the Armed Forces of Ukraine a significant number of weapons. These numbers would have been enough for a victorious defense operation against any army in Europe. But not against Russia.”