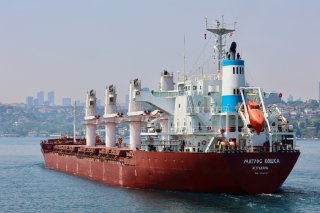 Russia, Turkey, and Ukraine are struggling to reach a grain export deal as global food insecurity concerns continue to mount.

Turkish efforts to mediate a compromise that would allow unimpeded grain shipments from Ukrainian ports have run up against competing concerns from Moscow and Kyiv. The deal, endorsed by the United Nations, would see the creation of a maritime trade corridor out of the southwestern port of Odessa. The arrangement would require the Ukrainian military to remove the sea mines placed to hinder a Russian naval assault on Ukraine’s western Black Sea coast. The Kremlin, in turn, would pledge to guarantee the safety of shipping corridors out of Odessa.

But negotiations have been stymied by Moscow’s insistence that the deal should include at least a partial relaxation of the Western sanctions triggered by Russia’s invasion of Ukraine. Russia—which, along with Ukraine, is one of the world’s largest exporters of grain—has conditioned further grain exports on the reversal of sanctions. "President Putin said that in order for Russian grain volumes to be delivered to international markets, direct and indirect sanctions against Russia must be lifted," said Kremlin spokesman Dmitry Peskov, adding that “no substantive discussions” about the easing of sanctions have taken place.

Ukraine, which reportedly did not directly participate in this week’s talks, announced it will not de-mine its ports. "The moment we clear access to the port of Odessa, the Russian fleet will be there," said regional Ukrainian official Sergiy Bratchuk. “Putin says he will not use trade routes to attack Odesa,” tweeted Ukrainian foreign minister Dmytro Kuleba. “This is the same Putin who told German Chancellor Scholz and French President Macron he would not attack Ukraine — days before launching a full-scale invasion of our country. We can not trust Putin, his words are empty.”

Putin portrayed the grain blockade as a manufactured problem in an interview with state news channel Russia-1 last week, arguing that there are alternative shipping routes through Poland, Romania, and Belarus that could be used to export the millions of tons of grain currently sitting in Ukrainian silos.

Ukrainian officials have accused Russia of appropriating roughly 600,000 tons of grain from eastern and southeastern regions occupied by the Russian military. Russian-aligned occupation officials in the Zaporizhzhia and Kherson regions previously said they are actively shipping grain to Russia. Yevgeny Balitsky, a pro-Russian local official in Zaporizhzhia, reportedly told a Russian state news outlet that some of the grain in question will make its way to Turkey. The Kremlin said on Thursday that no deal has been reached with Turkey regarding Russian grain exports. “So far no agreements have been reached, work is continuing,” said Peskov.