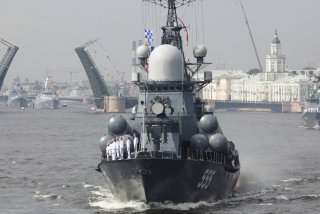 Russia and Turkey have signaled support for a possible deal to unblock grain exports from a key Ukrainian port hub.

Ankara is coordinating with Moscow and Kyiv to open a corridor from the southwestern Ukrainian city of Odessa to resume global grain shipments, Turkish defense minister Hulusi Akar told reporters, according to Reuters. Turkish officials say the plan involves clearing the sea mines that were reportedly placed by Ukraine’s armed forces to make it more difficult for Russia’s Black Sea Fleet to mount a naval assault against Odessa.

"Mines laid by Ukraine in the Odessa region are one of the obstacles to the safe transportation of grain. Another reason is the sanctions against Russian ships—their insurance, as well as the impossibility of servicing them in international ports," said Turkish foreign minister Mevlut Cavusoglu, according to Russian state news outlet TASS.

The Kremlin has previously expressed concerns that a grain export corridor could be used to ship Western military aid into Ukraine. "Ukraine does not want Russian ships to enter Odessa, while Russia does not want other ships to use this corridor to deliver weapons to Ukraine. Both sides need confidence and guarantees," Cavusoglu said.

Between the two of them, Russia and Ukraine supply more than a quarter of the world’s wheat. The United Nations previously estimated that there are upwards of twenty million tons of grain waiting to be shipped out of Ukraine, with UN chief António Guterres warning that the wartime disruption of Ukrainian grain exports threatens to compound the global food insecurity challenge.

Russian president Vladimir Putin dismissed concerns over food insecurity as a manufactured crisis in an interview given to state broadcaster Russia-1 on Friday. “As for the export of Ukrainian grain, we do not prevent it,” he said. “We didn’t mine the approaches to the [Odessa] port, it was the Ukrainians who planted the mines … let them clear the mines, and please, allow ships with grain to leave the ports. We guarantee their peaceful passage without any issues in international waters. There are no problems, go ahead. They need to demine [the ports] and salvage the ships from the bottom of the Black Sea that they purposely sunk to hinder the entry into Ukraine’s southern ports.”

Putin claimed that Russia is prepared to allow the export of Ukrainian grain through the Russian-controlled Black Sea ports of Berdyansk and Mariupol “with no conditions” attached. The Russian president further suggested that it is “possible to export grain from Ukraine through the Danube and through Romania,” as well as through Hungary and Poland.

"Finally, the simplest thing is export through the territory of Belarus. The easiest and cheapest, because from there immediately to the ports of the Baltic states, to the Baltic Sea and further to anywhere in the world. But for this you need to lift sanctions from Belarus," Putin said.

Kyiv has not commented on the possibility of alternate grain shipping routes through the Danube, but President Volodymyr Zelenskyy has explicitly rejected exporting Ukrainian grain through Belarus.