Can the United States Ever Defend Against Hypersonic Missiles? 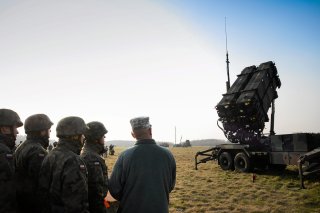 The world is now focused on Russia’s recent decision to fire hypersonic missiles in Ukraine, a move likely intended to send an intimidating message to NATO, the United States, and other rivals.

The conventional wisdom—that there is simply no effective defense against hypersonic weapons—is true. However, there may be misconceptions about the possibility of hypersonic weapons ever being defended against.

Avenues of exploration in the world of hypersonic defenses are multi-faceted. These efforts include the exploration of “boundary layer phenomenology,” a method of inquiry exploring the possibility of disrupting the airflow surrounding a hypersonic projectile to throw it off course. A senior official with the Air Force Research Laboratory described this concept to the National Interest, suggesting that new innovations in this realm are gaining traction. Typically, the hope would be for a hypersonic projectile to travel with a smooth airflow surrounding it, something that favors stability in flight. However, should the airflow become turbulent in any way, the molecules could shift in flight and throw the weapon off course.

Another emerging area of hypersonic defenses is based in space. Developers hope that lower-flying, better-networked satellites can help establish a continuous targeting track of an approaching hypersonic weapon. Under current circumstances, hypersonic projectiles will likely travel too quickly from one radar aperture to another, making it virtually impossible to establish a consistent targeting track.

When a missile traveling at hypersonic speeds passes from one radar “field of regard” to another, it can be lost in transition and therefore need to be reacquired. This can impede continuous tracking and complicate efforts to establish a track loop sufficient to destroy the missile.

Networking and processing this kind of data is the reason why the Pentagon is launching the new Hypersonic and Ballistic Tracking Space Sensor technology, which aims to establish a "continuous track" by networking small satellites.

“One method is obviously data fusion, and doing what fusion implies, I need to get that data that comes from the satellites down to the ground and to weapons as quickly as possible. A method of doing that is … processing some of that data in real-time to a weapons database and transferring that data from the satellite system down to the weapon,” said Mike Ciffone of Northrop Grumman last year.