Can the U.S. Army’s Next Generation Squad Weapon Get the Job Done? 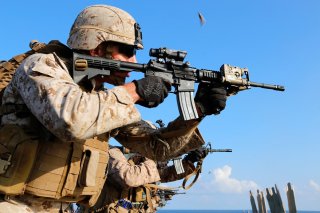 The Pentagon will soon announce a contract for the U.S. Army's Next Generation Squad Weapon (NGSW) program for 6.8mm chambered platforms. Yet, it is far from certain that the weapon Gen. Mark Milley himself commissioned will survive his retirement.

The NGSW is a purely offensive round, but it is by no means designed to hold a line. Being twice as large as the 5.56mm rounds American soldiers currently use, the NGSW fire solution comes down firmly on one end of the ballistic continuum. Accordingly, American soldiers are on the eve of a new tactical reality in which they will enjoy twice the distance of engagement but have half the stowed rounds they currently carry, and they will go to battle without a standard-issue side-arm to boot.

What has been monumentally shocking about the post-Afghanistan strategic introspection is the recurrence of Vietnam syndrome, or simply erasing wartime experiences from the institutional memories of U.S. service branches. The 5.56mm is indeed anemic for modern combat given the prevalence of chest rigs and armor plating designed for close-quarters, high-volume warfare like the fighting seen in Vietnam. But unthinkingly swinging to the other end with the NGSW and preparing to fight the last war, where distance was the engagement issue, sets the stage for strategic suicide. The battles of Little Bighorn, the Chosin Reservoir, Mogadishu, Iraq, and Wanat—and the Global War on Terror itself—are replete with tactical stories that emphasize high-volume firefight methodologies requiring the same kind of capabilities seen in mountain engagements like those in Afghanistan.

The lessons of Vietnam and Afghanistan represent a double-edged sword. In Vietnam, a smaller but more voluminous round—the 5.56mm at around sixty grains—was the best the Army could do to manage the war’s tactical equation. By doubling the round weight and adding 50 percent to weapon weight in the NGSW, the Army has gone back to the future with a pre-Vietnam 7.62x51mm and 120-grain class approach to small-arms doctrine. This begs the question of why the Army can’t just land in the middle by developing a median round.

When the NGSW program falters and is eventually rejected for the theoretical and practical mess that it is, the Army should not walk away from the long caliber rounds as it did under the auspices of counterinsurgency theory.

The real tragedy of the NGSW program is that the Army was so close to getting it right. Where the Army stumbled was in its insistence on using an in-house designed 6.8mm, 140-grain bullet to claim intellectual property ownership of the program. Contrary to popular belief, the Army does not know its small-arms theory well, as the train of historical programmatic failures attests. The Army nonetheless almost landed at its Goldilocks round—it only fell short when it couldn’t comprehend anything outside the biggest solution. While the 5.56mm is too weak for the modern battlefield, the Army’s current 6.8mm “Franken-round” is far too strong to be used in modern combat.

Should the NGSW implode, the Army must not be discouraged and simply stick to the 5.56mm for the shame of trying. Rather, it will need to find a median round with a bonafide 6.8mm class cartridge around the ninety-grain mark. Anything bigger will be onerous for both infantrymen and their weapon systems. The answer then is a “6.8mm-lite” or “NGSW-lite” program. The Army needs a well-thought-out 6.8mm program, not an artless, politicized, and wasteful swing back to the other end of the caliber scale.

Dr. Allan Orr is a strategic studies specialist who focuses on asymmetric warfare. His current analytical interests include hostage rescue, where he developed an interest in small-arms following the Lindt Cafe Siege in Sydney.