Has Ukraine Killed the Army's Next Generation Squad Weapon? 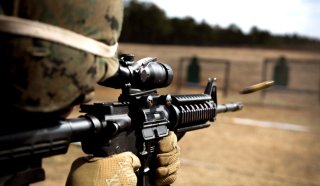 In 2018, the U.S. Army began a “transformational” small-arms program to replace the rifle that American and many allied troops have been issued for nearly three-quarters of a century. The program, called the Next Generation Squad Weapon (NGSW), was ambitious to succeed where many, many prior programs had failed: the OICW, XM-8, and ICSR, to name a few.

The rationale for the Next-Gen Squad Weapons program was exceedingly simple: provide a rifle with increased “lethality” over the present M4 Carbine given the post-Afghanistan focus on “near-peer” warfare. But to paraphrase one industry insider, “the NGSW is a bullet program, not a rifle program.”

The main peer cited in the NGSW conversation is Russia, and concerns rose following reports that Russian infantry were set to receive “Ratnik” (Warrior) combat gear, including the highest level of body armor available (Level IV). As such, the U.S. Army needed to invest what would turn out to be hundreds of millions of dollars in one more rifle initiative if it was to keep up with Russia.

The Russian performance in Ukraine has dispelled any notion of “peer” threat, however. The Pentagon has admitted as much itself, recently downgrading Russia from “near-peer” to “acute” threat. Judging by combat footage in Ukraine, it has become clear that Russia has issued as standard neither weapon optics, night-vision goggles, nor even the most rudimentary of body-armor systems.

There are rumors that Russian tanks have been made of low-grade steel, that Chinese tires have failed the fuel trucks, and that the Moskva was a rust bucket when it sank. That Ratnik is also less than expected has been undoubtedly verified. Given that Ratnik has been smoke and mirrors, and Russian industry an abysmal, corrupt failure, then one might reasonably ask: is the NGSW still needed?

Nicholas Drummond has opined barrel wear and recoil are major practical concerns with the program as well. Still, more issues will be decreased ammunition loads (since the round is twice as heavy as the 5.56mm), increased collateral damage risk (given the round is twice as powerful), as well as potential political problems with plastic bullets amidst Allied governments. The chances of Allied nations either adopting the significantly more powerful round are also next to zero, particularly given the slew of recent rifle acquisitions among NATO and non-NATO countries alike, such as France and New Zealand, who have only just transitioned to Stoner assault rifles to finally use “stanag” magazines. The slight ballistic advantage the 6.8mm gives over the existing 7.62x51mm round neither ever justified the program from a financial perspective.

Word in the industry is that the program has not reined in recoil nor navigated the reduced round-count dilemma, and that U.S. Army will purchase an initial run of the rifle but then will let it, like all antecedent programs before it, fade into ignominy in short-order. Given that Ukraine has peeled back the hood on Russian military modernization efforts, and that there is nothing “next-Gen” about the rifles themselves, it appears that the program will meet another inglorious end.

Dr. Allan Orr is a strategic studies specialist who focuses on asymmetric warfare. His current analytical interests include hostage rescue, where he developed an interest in small-arms following the Lindt Cafe Siege in Sydney.