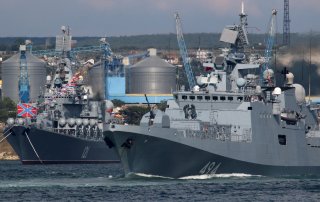 Odessa state regional administrator Maxim Marchenko claimed on Wednesday that the flagship of the Russian Black Sea Fleet, the Moskva, had been struck by a Ukrainian Neptune anti-ship cruise missile. Marchenko said the missiles caused “very serious damage,” but he did not immediately specify the ship’s condition.

While Russia’s Defense Ministry acknowledged that a fire had broken out on the Moskva, it denied Ukrainian accounts that the ship had sunk to the bottom of the Black Sea. “The source of the blaze on the Moskva cruiser has been contained,” a Russian Defense Ministry statement read. “No open flames are seen. The explosions of ammunition have been stopped.”

The statement also claimed that the Moskva had remained afloat and was being towed to port. Russian authorities say the ship’s roughly 500-strong crew was evacuated; there is currently no information on possible casualties among Russian sailors.

Pentagon press secretary John Kirby did not confirm on Thursday that the Moskva had been struck by Ukrainian missiles and seemingly refuted claims that the ship had sunk. “We're not quite exactly sure what happened here. We do assess that there was an explosion, at least one explosion on this cruiser. A fairly major one at that, that has caused extensive damage to the ship,” Kirby told CNN. “We assess that the ship is able to make its own way, and it is doing that; it's heading more towards, now, we think the east. We think it's probably going to be put in at Sevastapol for repairs,” he added.

The strike was reportedly conducted from a Ukrainian Neptune missile battery in or around the strategic southwestern port city of Odessa.

The Moskva, a Slava-class guided-missile cruiser, was commissioned in 1982. One of three active Slava-class cruisers, the Moskva serves as the flagship of Russia’s Black Sea Fleet. The Neptune is a Ukrainian anti-ship cruise missile modeled on the Soviet-era Kh-35 anti-ship missile. While the Neptune is based on a Cold War-era missile, the first Neptune systems were delivered to the Ukrainian Navy in March 2021.

Though it appears the Moskva remains afloat, the ship has almost certainly been taken out of commission. Carl Schuster, a retired U.S. Navy captain and former director of operations at U.S. Pacific Command’s Joint Intelligence Center, told CNN that the Moskva could be the largest warship ever to be taken out by a missile. If confirmed, the strike marks one of the most significant naval losses of the past several decades. In more concrete terms, the Moskva’s loss could deal a major setback to Russian forces as they regroup for a renewed offensive in southeastern Ukraine. Ultimately, the Black Sea Fleet has been deprived of a key naval weapons platform that could be used to pressure the southern coastal city of Mykolaiv, which must be captured before the bulk of Russia’s southern forces can advance westward in the direction of Odessa.