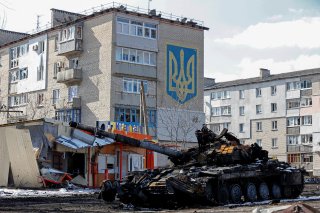 Russian forces struck the strategic port city of Odessa on Sunday. “Odessa was attacked from the air. Some of the missiles were downed by our air defense system. In some districts fire has broken out,” the Odessa City Council wrote on Telegram. Local officials did not specify how many of the Russian swarm missiles made it past Ukrainian air defenses.

A CNN team on the scene reported that a fuel depot was hit by the Russian strike, with a witness telling a reporter that they heard six explosions at the depot before sunrise. Authorities have not yet reported any casualties from the attack. One of the strikes hit a “critical infrastructure object,” said Serhii Bratchuk, spokesman of the operational staff of the Odessa regional military administration. “Currently the situation is under control, the respective services are working on site. The details will be announced later,” he added.

The Russian military confirmed the strike. "This morning, high-precision sea and air-based missiles destroyed an oil refinery and three storage facilities for fuel and lubricants near the city of Odessa, from which fuel was supplied to a group of Ukrainian troops in the direction of Mykolaiv," the Russian Defense Ministry reportedly claimed in a statement on Telegram.

The Odessa strike follows shortly on the heels of an announcement by Russian deputy defense minister Alexander Fomin that the Kremlin has decided to scale back military operations in Kyiv and northeastern Ukraine. Russian forces may be deprioritizing ground operations in other parts of the country in order to focus on consolidating control over southeastern Ukraine, though the extent of Russia’s de-escalation around Kyiv remains unclear. U.S. officials and NATO chief Jens Stoltenberg have warned that any potential movements of Russian troops around Kyiv are a “repositioning,” not a real withdrawal, and the fighting in that region will continue.

With the southeastern port city of Mariupol all but under Russian control, the invading forces may be planning to launch a renewed westward offensive in the direction of the strategic southern city of Mykolaiv; the city was hit last week by a major Russian airstrike against a local government administrative building. Seizing Mykolaiv, which is being blockaded by ships belonging to Russia’s Black Sea Fleet, would put the Russian forces in a position to strike out in the direction of Odessa, one of the war’s biggest strategic prizes. The potential fall of Odessa would give Russia control over the Black Sea coast, achieving one of Moscow's apparent goals of effectively turning Ukraine into a landlocked country.