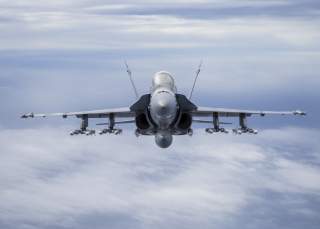 The U.S. Marine Corps is developing a wide-ranging plan for keeping its old F/A-18 Hornet fighters combat-ready until the service finally buys enough new F-35 stealth fighters fully to replace the aging Hornets by the year 2030.

As of early 2019 the Marine Corps had procured 135 vertical-landing F-35Bs as well as 23 F-35Cs for aircraft-carrier operations. By 2030 the Corps wants to have 420 F-35s spread across 20 front-line squadrons and two training units.

By then the F-35 would be the Marines' only fighter aircraft, having replaced not only the F/A-18 but also the AV-8B jump jet and the EA-6B electronic-warfare plane.

In order to bridge the 11-year transition to an all-F-35 force, the Marines are leaning on the remaining 11 Hornet squadrons, which together fly more than 160, mostly 1990s-vintage Hornets. The fighters are a mix of single-seat F/A-18A++ and F/A-18C and two-seat F/A-18B and F/A-18D models.

The transition schedule sees the Hornet units transitioning to F-35s at a rate of around one per year. The Marines in the meantime plan to upgrade the planes. The most important update is the APG-79v4 electronically-scanned array radar that replaces the F/A-18's old mechanical radar. An AESA radar is more reliable and more powerful than mechanical radars are.

"With sundown on the horizon, the F/A-18A-D is nearing the final fit for adding capabilities," the plan continues. The Marine F/A-18s' ultimate configuration includes avionics and software upgrades, new weapons including the AIM-9X Block II and AIM-120D air-to-air missiles, the laser-guided Advanced Precision-Kill Weapon System rocket and the Joint Stand-Off Weapon glide bomb, the new LITENING target pod that feeds high-definition video into the cockpit and several radio upgrades.

But the Marines are struggling to keep the old, upgraded F/A-18s in the air. "Readiness is directly affected," the aviation plan explains. "The supply system is not able to keep pace with material demands ... the quality of maintenance training curricula, maturation and standardization has not kept pace with readiness requirements ... [and] current maintenance manning levels are unable to support demands for labor."

"It is essential that this void be filled with contract maintenance support to make a positive impact on readiness," the plan states.

Moreover, many of the Hornets require close inspection and even time-consuming replacement of their center-fuselage structures in order to extend their service lives past 8,000 or even 10,000 flight hours and ensure they're safe to fly until 2030.

The Marines have a back-up plan. Not only is the Marine Corps bringing into service some of the healthier Hornets that the U.S. Navy in recent years has retired, the Corps also is considering buying back F/A-18s from allied countries.

That's the same strategy the Canadian air force is pursuing for its own F/A-18 squadrons as it acquires retired Australian Hornets. Similarly, the Marine Corps in 2011 acquired 72 of the British military's old AV-8s and broke them down for spare parts.

"Possible F/A-18C divestment in partner nations in the 2020 timeframe may provide additional opportunities to strengthen the USMC aircraft inventory," the aviation plan states. The Australian and Kuwaiti air forces both are in the process of replacing their F/A-18s, potentially freeing up scores of airframes over the next few years.