Can the U.S. Navy Improve Its Littoral Combat Ships? 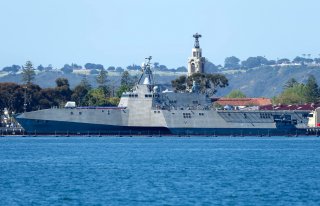 Beneath the visible enthusiasm about new U.S. Navy platforms like the DDG 51 Flight III and the DDG X destroyer program, the service is quietly continuing to produce and improve its growing fleet of Littoral Combat Ships (LCS).

The Navy has already commissioned as many as twenty-three Littoral Combat Ships, and thirty-five have been awarded or put on contract, according to Navy data on the LCS fleet. While it may seem somewhat beneath the radar, LCS production is consuming a massive amount of the Navy’s attention. Beyond the thirty-five currently on contract, three more are pre-delivery, five additional LCS are under various stages of construction, and four are in the pre-construction phase

“We're continuing that strong drumbeat of production, we're still tearing through a lot of the ships that are in post-delivery, making sure that we're finishing those up strong, and we are making sure that we continue to incorporate lessons learned,” Capt. Andy Gold told an audience at the 2022 Surface Navy Association Symposium.

With thirty-five already awarded and more on the way, it might be easy to forget about the sheer size of the LCS fleet. However, the Navy hopes to continue building and deploying a strong, large LCS fleet.

“Our big focus remains on strong production and sustaining the great efforts of industry and Navy folks who oversee this … we are just tearing through maintaining a very, very strong pace of all the production things, even through COVID,” Gold said.

Gold added that the Navy is still learning from the ships that it deploys to make sure that “the ships are more reliable, more sustainable … and able to do even better things out on deployment.”

Gold stressed that continued LCS production is heavily focused on a “rigorous process” that aims to implement lessons learned from ship deployments. He added that the Navy is “not done when [it] delivers ships.”

“[We are] taking things from deployments that are coming back, and learning about areas where we can focus on particular items … and improve the reliability to help the sailors figure out how to maintain them better. Maintenance execution teams are trying to help them be able to support and repair their ships when they come back into port,”  Gold said.