Can the U.S. Navy Keep Up With China? 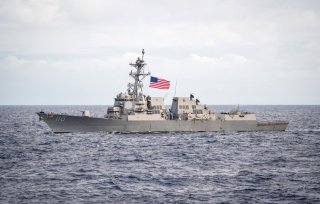 The People’s Liberation Army-Navy is surging ahead to build new Type 055 stealth destroyers, several new Type 075 amphibious assault ships, and a third aircraft carrier. How is China’s industrial base able to produce new platforms at this rate?

For policymakers, the complexity of this issue stems from the fact that China does not distinguish between commercial and government enterprises but merges their work for civil-military fusion projects This can expedite platform modernization, and when combined with the size of its shipyards and labor force, China’s shipbuilding machine is a formidable competitor to the United States.

“When you look at the modern elements of the Chinese navy, it should concern all of us … not only the total number of ships but actually which ships are comparable to ours,” Rep. Rob Wittman (R-VA), ranking member on the Seapower and Projection Forces Subcommittee, told The National Interest in an interview.

Wittman’s comments resonate with remarks he made in a previous discussion with The National Interest in which he noted that while most people are aware that China has lots of ships they are increasingly improving their quality as well. Many of the relevant specifics are not publicly available yet but China is known to be rapidly developing its naval technologies. The numbers gap between the United States and China when it comes to warships is growing larger, Wittman said.

“We have about 167 warships that you would consider state of the art incredibly complex, capable of multiple mission sets, and can do that in a pretty significantly contested environment. If you look at the total number of Chinese ships, both their larger warships and their smaller platforms, they have about 285 that are the equivalent of ours. So they still have significant overmatch there. So we had better get our act together as far as the total complement that we bring to the table, autonomous systems, unmanned ships, as well as the ships that we have now and the ships that we need to build in the future,” Wittman said.

This circumstance may be why the U.S. Navy’s Navigation Plan 2022 called for a 500-ship fleet with as many as 150 drones. The author of the plan, Chief of Naval Operations Adm. Michael Gilday, labeled this a “hybrid” mix driven by manned-unmanned teaming, advanced artificial intelligence (AI), and autonomy, as well as long-range sensors and multi-domain networking. The plan specifically mentioned the threat posed by China and emphasized the need for an intense and robust modernization and weapons development process.

The U.S. Navy is currently embarking upon a number of ambitious shipbuilding programs to include a contract for as many as ten new DDG 51 Flight III destroyers with advanced SPY-6 radar, and upgraded Aegis Combat Systems able to perform air and cruise missile defense on one system. Aegis Combat System advanced software can connect fire control systems for ship defenses with a highly-sensitive, long-range radar able to see threats half the size at twice the distance. The Navy is accelerating the construction of Virginia-class attack submarines and adding a new fleet of Constellation-class frigates. The service is also pivoting toward the future through conceptual work on new platforms such as the DDG(X), a next-generation destroyer intended to sustain naval surface warfare through 2060.