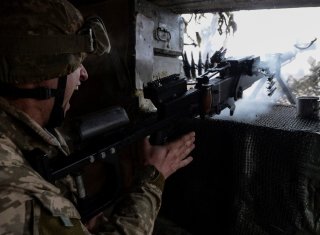 Ukraine has been unable to produce small arms ammunition since Russian-backed separatists took part of the country’s territory in 2014. The Eastern European nation’s sole facility is still in territory controlled by opposition forces, and Kiev has called on the West for assistance. As part of a $60 million security assistance package, small arms and ammunition were delivered to the country in December 2021.

The security package is designed to bolster Ukraine’s self-defense capability and to address the buildup of Russian forces near the country’s borders. Last year, the United States delivered approximately $450 million in security assistance to Ukraine.

Now it looks as if some Canadian-based firms are going further. An effort to build an ammunition plant in Ukraine is underway, and it involves a number of Ontario companies as well as the Canadian Commercial Corporation (CCC) in Ottawa.

“CCC’s support to Ukraine is currently at the exploratory stage,” Mouktar Abdillahi, a spokesperson for the corporation, told The National Post this week. CCC, a federal Crown corporation, was created to help Canadian-based firms secure international contracts with foreign governments.

It was in December 2017 that the House of Commons Defence Committee first recommended that the Canadian government provide weapons to Ukraine. Yet there was a condition: Kiev had to demonstrate it was working to eliminate corruption at all levels of government. Ukraine has long been considered one of the most corrupt countries in the world, and in recent years its government has been trying to deal with the problem.

There have been a number of twists and turns over the past seven months since the ammunition factory was first proposed. As The National Post reported in June, Waterbury Farrel of Brampton, Ont. announced it had joined with a newly created firm called GL Munitions, based in Toronto, to provide Ukraine with an ammunition-production facility.

In addition, Waterbury Farrel stated it was working with the Canadian government, through the CCC, to actually meet that goal. Ukroboronprom, Ukraine’s organization of defense firms, was also involved in the venture.

Trouble began after GL Munitions was dissolved, and Andrew Leslie, a former Liberal MP and retired Canadian Forces lieutenant general, who was also a director at the company, told the Canadian news outlet that he was no longer associated with the venture. Leslie declined to provide further details, while Waterbury Farrel did not respond to a request for comment to the publication.

The next turn came on November 5, when the CCC informed Ukroboronprom that GL Munitions had changed its corporate structure, noting, “The founders of the Corporation have indicated that these changes will expedite the process towards finalizing the creation of the small-arms ammunition depot.”

To add to the confusion, the CCC revealed the existence of a new firm called Gold Leaf Munitions, The National Post reported. It had the same address in Toronto as GL Munitions.

At this point it seems that the Canadian firms are trying to move forward, but if and when the facility is built remains unknown.

When it is built, it likely won’t please Moscow.

Russian president Vladimir Putin has repeatedly threatened a military response if NATO nations, including Canada, were to continue with “unfriendly” actions including an “obviously aggressive stance” concerning Ukraine. Putin has also demanded that Ukraine never be allowed to join NATO and that the defense alliance scale back its troops and weapons in the region. Russia has even warned that it will sever ties with the United States if it sanctions Putin over the Ukraine crisis.