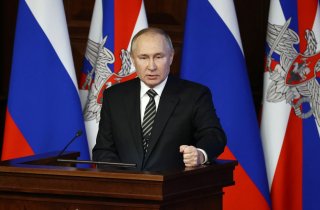 Twenty-two years ago this week, Vladimir Putin became president of the Russian Federation. Shortly thereafter, he declared that the collapse of the Soviet Union was “the greatest geopolitical disaster of the twentieth century.” Since taking power, Putin, a former KGB lieutenant colonel and former FSB Director, has left little doubt that his ultimate goal is the reunification of the former Soviet republics with Russia—either in an economic union or full-scale political union. Putin appears determined to achieve this objective during his lifetime and has spent the past two decades preparing Russia to accomplish it. He has built up and modernized Russia’s nuclear arsenal, super-Electromagnetic Pulse (EMP) and cyberwarfare capabilities, modernized Russia’s national missile defense system, expanded Russia’s network of underground nuclear command centers, and further hardened Russia’s critical infrastructure against EMP attack.

During the same period, Putin has utilized two arms control treaties—the SORT Treaty and the New START Treaty—to induce the United States to unilaterally disarm over three-quarters of its strategic nuclear arsenal. Meanwhile, Russia has been cheating on both treaties in a myriad of ways, building half a dozen new nuclear superweapons unconstrained by existing arms control agreements. By so doing, he has achieved what his predecessors tried but largely failed to achieve—Russian nuclear superiority over the United States. Nuclear superiority could potentially enable both Russia and China—which is currently engaged in its own “breathtaking” nuclear buildup and has been deepening its alliance with Russia—to reclaim lost territories by force. Fueling their new self-confidence is the fact that America’s nuclear deterrent has been aging and becoming less credible and less reliable due to the failure of U.S. leaders to modernize or rebuild it to restore “rough” nuclear parity with Russia.

This year will likely be much more precarious than the last one has been. Russia has amassed a force of over 120,000 troops (expected to increase to 175,000 troops by the end of January) on Ukraine’s northern, eastern, and southern borders, and U.S. intelligence is predicting an invasion could happen in late January or February. For the second time this year, the United States has raised its alert status to DEFCON 3 in response to the threat of a Russian invasion along the borders of the NATO alliance, something that hasn’t happened in almost fifty years.

The reunification of Russia with Ukraine, the largest of the former Soviet republics, is the key to Putin achieving his dream of reasserting Russian control of the former nations and territories of the Soviet Imperium, making it virtually impossible that Putin can be persuaded to back down without meeting his terms. Meanwhile, concerns are mounting that China could take advantage of a Russian invasion to stage its own mischief, such as an attack on Taiwan, all but ensuring that the United States would be unable to respond to either aggression effectively. Depending on how the Biden administration chooses to react to a Russian invasion of Ukraine, it could prove to be the spark that ignites a Third World War, just as the invasion of Poland by Nazi Germany started the last world war, which claimed the lives of as many as 70 million people. However, unlike the last world war, which did not directly affect the U.S. homeland—despite it requiring food rationing and troops being sent to fight abroad—this one would likely impact the home front like never before. The possibility of Sino-Russian cyber, EMP, and even nuclear or biological attack cannot be ruled out.

By every indication, Putin’s decision to invade Ukraine has already been made. No threats to use military force or to deploy additional U.S. military forces to NATO’s frontline states, let alone threats to enact stronger U.S. economic sanctions, are likely to stop him from doing so. Russia is already well-insulated from additional U.S. and Western sanctions against it due to its expanding trade and economic relations with China, whose economy exceeds that of the United States, both in terms of its size and manufacturing capabilities. The Biden administration recently stated that “there is a ‘four week window’ to deter Russia from invading.” However, Russia is most likely planning to invade Ukraine by February, but no later than April, in conjunction with a near-simultaneous Chinese invasion of Taiwan and, quite possibly, a North Korean invasion of South Korea.

Just this past week, Putin issued what some have denounced as a diplomatic ultimatum to the United States and NATO to accept his proposed security agreement, subtly hinting that if they refuse to do so, the result will be the outbreak of a full-scale war between Russia and Ukraine. Russian Foreign Ministry officials have threatened military action if the United States and NATO refuse to negotiate an arrangement based on Putin’s proposed security agreement. Thus, the only question at this point is whether Putin will achieve his objective of Russian domination over Ukraine and the other former Soviet republics by mostly peaceful, diplomatic means, in partnership with the United States, or whether he will attempt to accomplish it by war at the cost of hundreds of millions of lives. It appears clear that Putin would prefer to satisfy Russia’s security concerns along its western frontier without the need to resort to war, but, thus far, it also seems that stopping a Russian invasion of Ukraine requires U.S. acceptance of an agreement broadly similar to that which Putin has offered.

Most analysis of Putin’s offer has focused on the various ways it is likely to be deemed unacceptable to Western leaders, but it may well be the least bad option. Putin’s demands are not as unreasonable as many Western commentators have suggested. Jacob Dreizin, a U.S. commentator who speaks Russian, has reviewed a copy of Putin’s proposed security agreement and stated that it suggests the creation of an Eastern European “buffer zone,” calling it “a two-way security agreement” and “non-aggression pact ready for signature.”

Putin’s proposed security agreements with the United States and NATO call for the withdrawal of all foreign troops from the territories of NATO member states in Eastern Europe. Other provisions include a guarantee that there will be no further eastward expansion of NATO—to Ukraine or the other former Soviet republics—and that no U.S. or NATO ballistic missiles be stationed in Eastern Europe. Yet a provision of Russia’s proposed security agreement states that the United States would “undertake to prevent further eastward expansion of the North Atlantic Treaty Organization and deny accession to the Alliance to the states of the former Union of Soviet Socialist Republics,” which could be interpreted to require the expulsion of the former Soviet republics of Estonia, Latvia, and Lithuania from NATO. While the Biden administration has suggested that this provision is unacceptable, it would be in the U.S. national security interest to do so as the United States has no vital interests in the Baltic republics and recent wargames consistently show the U.S. losing to Russia should a fight over them occur.

The draft agreement would also prevent both nations from deploying heavy bombers and naval forces in international airspace and international waters “from where they can attack targets of the other Party.” This provision would effectively require the United States to end its deployments of nuclear bombers and naval forces in the Baltic and Black Seas, as well as along Russia’s Far Eastern coastline, which Russia views as provocative, thereby reducing the chances of war between Russia and the United States.

While former President Donald Trump was unsuccessful in his attempt to forge a lasting peace agreement with Russia due to constraints imposed by his domestic political opponents, President Joe Biden has been given a golden opportunity with Putin’s draft security agreement to accomplish what his predecessor could not. Although it is encouraging that the Biden administration is planning to meet with Russian Foreign Ministry officials to discuss the proposed agreement on January 10, it must offer Russia substantial concessions to prevent the imminent outbreak of a major war in Europe. As a prelude to the bilateral U.S.-Russian negotiations set to begin in January, the Biden administration should provide Russia a written guarantee that it will never allow Ukraine to join NATO, will not intervene militarily in any Russo-Ukrainian conflict, will cease all military assistance to Ukraine, and encourage Ukraine to negotiate a peaceful settlement with Moscow.

The United States should use Putin’s proposal as the basis to negotiate a much more lasting and comprehensive peace agreement with Moscow. As I recently argued in the National Interest, the United States should remember how the 1945 Yalta Agreement’s creation of spheres of influence helped keep great power peace for over half a century. It is notable that my argument “aroused considerable interest in Russia,” according to an article published by the Russtrat Institute of International Political and Economic Strategies. In fact, some of the provisions in Russia’s draft agreement are very similar to the ones I have previously proposed. These similarities include withdrawing U.S. forces from Eastern Europe, creating a “buffer zone” outside of either the U.S. or Russian spheres of influence, and recognizing a Russian sphere of influence in the former Soviet Union to satisfy Moscow’s vital interests. This arrangement would better safeguard the U.S. interest in securing a much more stable and enduring great-power peace.