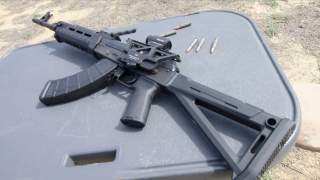 The AK-47 is the most popular rifle in the world.

It’s easy to use, easy to repair, and straight up reliable. Though not known for great precision, they get the job done.

Since 1947, AKs have spread around the world due to their usefulness and low cost. The iconic Soviet look and practicality of AKs have also inspired many Americans. There has always been a demand for AK-47s, whether for collecting, hunting, or home defense.

But importing AK-47s has gotten harder over the years for legal and political reasons. The solution? Century Arms’ Red Army Standard RAS47 Zhukov.

This stamped-receiver AKM strives to scratch the AK itch that many gun owners feel. It’s a Kalashnikov-style gun, but it has a few upgrades and a modern look as well. Let’s take a closer look.

Chambered in 7.62x39mm, Century Arms’ RAS47 is a gas-operated carbine. It has a Magpul folding stock, grip, and foregrip. But as a Mil-Spec AKM, it is easy to swap out aftermarket parts. This is great if you would like to customize your Century Arms RAS47.

The post-and-notch sights on the RAS will be familiar to AKM fans. The front sight post is adjustable for windage and elevation. It also features steel “wings” that protect the post from damage. The rear sight is adjustable for elevation, with presets for 100 to 800 meters.

Also familiar to AKs is the slant brake at the end of the muzzle. The muzzle also features concentric threads so you can easily add muzzle accessories. This is another way you can personalize the RAS to your liking.

Because the bolt does not hold open itself, Century Arms uses a notched safety selector. The notch in the selector catches the bolt and holds it open. This is ideal for safety checks or to help cool the gun. It’s a simple but nice feature. Like the gun itself, it gets the job done.

The magazine catch for the RAS47 is large and T-shaped. It’s positioned in front of the trigger assembly, and you can activate it with either hand. You can also use a full mag to depress the lever, push out the empty mag, and quickly reload. The magazine catch is larger than most mag releases, but it is not so big as to get in the way.

The RAK-1 enhanced trigger is smooth, with about 4lbs.,14oz. pull weight. It is a single-stage trigger, though it feels like a two-stage trigger. There is some resistance and a break halfway through the cycle. It’s a quality trigger; no worries about the dreaded AK “trigger slap” with the RAS47.

Like any good AK variant, the RAS47 is reliable to shoot (like the Hi Point) and not too expensive. You can find these guns for around $600, give or take. The RAS accepts any standard AK magazine, and it comes with a 30-round Magpul magazine.

Purists and AK-aficionados may not like the lack of a bayonet mount on this firearm. Also missing is the cleaning kit in the stock that more traditionally-styled AKs have. But the RAS is an affordable, modern take on a very popular weapon. As an AK variant or fun addition to the collection, it doesn’t need to look like guns from more than half a century ago.

And when it comes to accuracy, the RAS47 does well...for an AK variant. That is, their best range is going to be a close or medium distance. The RAS groups about 2.5 inches at 50 meters. That’s not bad, and more than acceptable for an AK.

So what’s the verdict?

The Century Arms American-made RAS47 is solid. It shoots well and it has many of the classic features that AK fans look for. In fact, the trigger assembly and mag release may improve upon the more traditional AK style.

In short: if you’re looking for the world’s highest-end, most historically accurate AK-47 then the RAS47 isn’t for you. But if you want a modern and affordable AKM with lots of customization options, then the Century Arms’ Red Army Standard Zhukov is a good choice. Its ease of use, low cost, and practicality may actually make this variant more in the spirit of Kalashnikov’s original automatic gun.

Richard Douglas is a firearms expert and educator. His work has appeared in large publications like The Armory Life, Daily Caller, American Shooting Journal, and more.