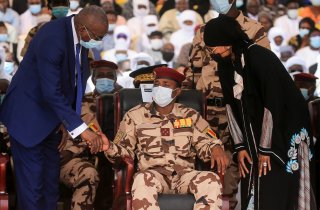 Mahamat Idriss Deby, Chad’s president, extended an olive branch to the country’s northern rebels on Monday by inviting them to a “national dialogue” to determine the country’s political future.

Deby’s new position contradicts a prior statement, which indicated that Chad’s government would not negotiate with rebel forces.

Deby, the thirty-seven-year-old son of long-time Chadian leader Idriss Deby, served as the head of his father’s Presidential Guard until he was killed in April after participating in a battle against the rebels. Shortly after his father’s death, the military disregarded the Chadian constitution’s succession process and instead created a transitional council, led by the younger Deby—an event that opponents described as a “dynastic coup.” However, as head of the country’s Transitional Military Council, Deby so far holds power in an interim role only; he has agreed to step down in eighteen months after elections are held in the country.

In his speech, Deby invited the rebels from the Front for Change and Concord in Chad (FACT, after its French initials) to take part in an “Inclusive National Dialogue.” Although Deby did not offer a timetable, it was understood that this dialogue, presumably preceded by a ceasefire, would take place in advance of the scheduled elections.

“The frank and sincere dialogue we all hope for will be open, in a specific manner, to the political-military movements,” Deby declared in his speech. “Petty practices, political calculations, and rearguard battles that have already caused too much harm to our country must be banished forever.”

Chad has been strongly affected by the chaos in Libya, its northern neighbor, and by turmoil elsewhere in Africa’s Sahel region. Chadian troops played a key role in repelling Boko Haram militants in neighboring Niger and the region around Lake Chad, shared between Niger, Nigeria, Chad, and Cameroon.

Prior to their offensive southward, the FACT rebels were based in Libya, where many of the group’s members had earlier served as mercenaries for the various factions fighting there. FACT was formed in 2016 as a splinter group of another rebel movement, the Union of Forces for Democracy and Development. During its spring offensive into Chad, the rebels came within two hundred miles of N’djamena, the country’s capital, before being driven back.

While Chad’s military junta had previously expressed reluctance to negotiate with the country’s rebels, Deby urged them to reconsider, citing a “patriotic obligation” to build national unity.