Check out the British Royal Navy's Might New Frigate 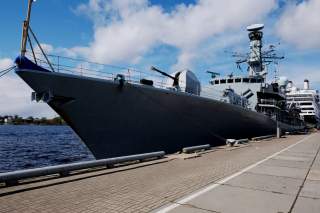 Key point: Britain needs more ships and it needs them fast. Here are the details on what might be their latest addition.

The U.K. defense ministry has tapped a builder for the Royal Navy’s latest class of frigate.

The ministry on Sept. 12, 2019 announced that U.K. engineering firm Babcock will receive a $1.5-billion contract to build five Type 31 frigates.

Babcock beat out several competitors including BAE Systems, which in 2016 won a contract to build eight new Type 26 frigates.

Together, the eight Type 26s and five Type 31s eventually will replace the fleet’s 13 Type 23 frigates, which entered service beginning in the late 1980s.

Babcock based its design on the Iver Huitfeldt-class frigate that’s in service with the Danish navy. Using an existing design should help to drive the cost of the Type 31s to around $300 million apiece, compared to $1 billion apiece for the Type 26s.

The defense ministry requires that the Type 31 “operate globally with sustained forward presence” with “the speed for interdiction of commercial vessels and maintaining station with adversary warships in U.K. waters.”

According to U.K. Defense Journal, that translates into a top speed of 28 knots and an endurance of 9,000 miles at 12 knots.

The Type 31 will boast a five-inch-diameter main gun plus 40-millimeter guns for close-in defense. The type will come with mission bays for small boats, drones and boarding parties. The frigate’s flight deck and hangar can accommodate a single Merlin helicopter or two Wildcats.

Additional equipment could include an eight-canister launcher for anti-ship missiles, a 32-cell vertical launch system for air-defense, land-attack and anti-submarine missiles, additional close defenses such as the Phalanx gun and a towed sonar array.

It’s unclear how many of the weapons and sensors the frigates will feature when they first begin entering service in 2024. “Babcock says that the ability to fit the existing systems and equipment from the parent design, the Iver Huitfeldt-class frigate, is retained to provide flexibility in the capability supplied at build and through the life of the platform,” U.K. Defense Journal explained.

The Type 31 complements the Type 26, the first of which should enter service in the early 2020s. With the Type 26, the Royal Navy could get a bigger and more balanced warship with a wider array of weaponry and sensors, U.K. Defense Journal explained.

More from the piece:

The new frigates from both classes will join the fleet at a critical time for U.K. sea power. The Royal Navy and Royal Fleet Auxiliary are beginning the process of reorganizing their forces, which include the two new carriers, six destroyers, 13 frigates, seven attack submarines, several amphibious assault ships and dozens of other vessels.

For years, British ships have tended to deploy singly or in small numbers. Soon they will begin deploying in greater concentration as part of carrier strike groups.