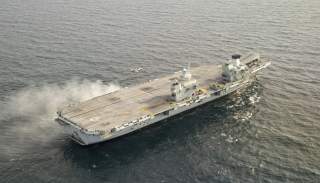 The United Kingdom’s new aircraft carrier has set sail for North America. The four-month “Westlant 19” deployment is a glimpse into the Royal Navy’s future as it reorganizes around HMS Queen Elizabeth and her sister ship Prince of Wales.

Also aboard: helicopters, a company of Royal Marines and a high-end medical team.

But the most important component of the trial strike group might be its fighters. Building on Queen Elizabeth’s 2018 flight trials, Westlant 19 will include five weeks of at-sea air operations involving no fewer than seven U.K. F-35B stealth fighters and pilots from No. 17(R) Test and Evaluation Squadron, No. 207 Squadron and No. 617 Squadron, the latter representing the front-line Lightning Force.

“The success of last year’s deployment during which we embarked and operated the F-35B for the very first time put us ahead of the curve in terms of developmental testing between the jets and ship,” said Commodore Mike Utley, commander of the strike group.

“We have a significant switch in focus this year, towards operationalizing this national defense capability – turning this ship, the jets for which it has been built and all supporting units into a cohesive, agile, efficient force.”

With Queen Elizabeth slated to begin deploying on front-line patrols starting in 2021, the U.K. fleet must figure out how to deploy, as a cohesive force, large numbers of warships comprising a carrier strike group.

As only one-third of warship are available for operations at any given time, in the Royal Navy a single carrier strike group easily could account for half the deployable frigates and destroyers.

Fleet planners are working on one possible solution. “Limited escort numbers offer limited choices but the [Royal Navy] is moving towards a new manning model which may get more from the same number of hulls,” Save the Royal Navy explained.

From the Royal Navy: