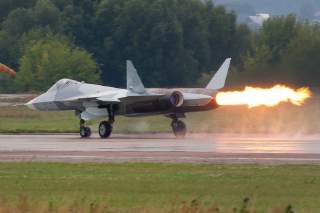 Key point: Moscow wants all kinds of weapons, but it doesn't have the money. Russia will no doubt look after its security, just not in the way it would like to.

The Russian armed forces have committed to a wide range of expensive acquisitions programs, in particular new ships and planes. The likely cost strains credulity.

With a mere $70-billion annual budget, a tenth what the United States spends on its own military, the Kremlin is trying to match many of the Pentagon’s major ship and plane programs. There’s a new stealth fighter. An armed wingman drone. A stealth bomber. An aircraft carrier.

If America struggles to afford all these new weapons, surely Russia struggles more.

But one expert is bullish, while also admitting that Russia might not acquire nearly as many new ships and planes at the United States does. “I think these systems will eventually be built and fielded,” Samuel Bendett, a researcher with the Center for Naval Analyses and a Russia studies fellow at the American Foreign Policy Council, told The National Interest. “This is now a matter of national pride for Russia.”

The Russian air force’s Su-57 stealth fighter has dominated headlines with two brief deployments to Syria in 2018 and 2019, Sukhoi’s aggressive sales efforts in Turkey and the Middle East and Russian president Vladimir Putin’s personal championing of the plane’s development.

Shortly following the 2018 deployment, the Kremlin suspended production of the Su-57 after the 28th copy, effectively canceling the program. Putin then dramatically revived the program in mid-2019, announcing a plan to buy an additional 48 copies.

The Su-57 could fly alongside the Hunter-B fighter drone, the first prototype of which took off for its inaugural flight in August 2019. Capable of high subsonic speed and armed, a Hunter-B in theory could function as a wingman to an Su-57, contributing its own sensors and weapons to an aerial battle.

But critics have pointed out the Hunter-B’s lack of all-aspect stealth and Russia’s relative inexperience compared to the United States when it comes to deploying large, high-performance drones.

Still, Bendett said he expects both the Su-57 and Hunter-B in coming years to enter service in meaningful numbers. “These are now programs of record and are at various stages of completion or testing/evaluation,” Bendett told The National Interest.

It’s riskier betting on the PAK-DA stealth bomber. Details are scarce when it comes to the new bomber, which reportedly is under development by Tupolev and could take to the air in 2025 or 2026, according to some outside experts.

But Bendett expects delays. “The eventual military acquisition date of 2027 may be pushed to the right,” he said.

Bendett is even more bearish on aircraft carriers. The Russian navy’s sole carrier Admiral Kuznetsov in October 2018 suffered serious damage at the 82nd Repair Shipyard in Roslyakovo, a northern port city, when the PD-50 dry-dock sank while Kuznetsov was aboard for repairs.

Disaster struck again in December 2019 when diesel fuel ignited on one of Kuznetsov’s lower decks. The carrier at the time was pierside in Murmansk, undergoing repairs.

The Kremlin has reviewed two competing designs for a next-generation flattop that eventually could replace Kuznetsov. The Barents Observer was skeptical. “Needed development and construction costs might exceed the capabilities of the country’s military budget.”

Bendett agreed. “Wanting one and building one are two different things,” he said of carriers. “I think Russia will try to get as much mileage out of Kuznetsov before finally retiring it. But since Russia is aiming for a blue-water presence, having an aircraft carrier is a must.”

“On the other hand, there are significant costs associated with such a construction,”  Bendett added, “which is why its taking Russia a while to organize its resources to settle on Kuznetsov's eventual replacement.”

In short, the Su-57 and Hunter-B are sure things, the PAK-DA is somewhat less so and a new carrier, while likely, is a distant prospect, according to Bendett. But there’s an important caveat.

While the United States confidently plans to acquire many hundreds of F-35 stealth fighters, a hundred or more new B-21 stealth bombers, a variety of new drones and enough new carriers easily to maintain the world’s biggest flattop fleet, Russia could complete development of new weapons in all the same classes but buy only small numbers of them, Bendett said.

“Eventual numbers of aircraft built may vary from the initial announcements due to a range of factors such as the state of the domestic military industry, the state of the military budget and the overall health of the Russian economy.”