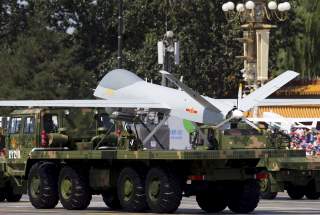 Middle Eastern countries prohibited from purchasing armed drones from the United States are flocking to another increasingly influential seller in the Chinese government, according to a new report from the Associated Press, sales that “are helping expand Chinese influence across a region vital to American security interests.”

- Chinese drones are increasingly doing battle in the skies above Saudi Arabia, Jordan, Nigeria, Yemen, Iraq, and the UAE thanks to increasing sales, with more than 30 CH-4 unmanned aerial systems worth $700 million being sold to countries since 2014.

- Chinese arms exports increased by 38% from 2008 to 2012 and from 2013 to 2017, according to Stockholm International Peace Research Institute data cited by the Associated Press.

- The growth of China’s share of the drone market comes thanks to restrictions enacted under President Barack Obama that limited the sales of UAVs to foreign countries due to concerns over rising civilian casualties, a policy President Donald Trump sought to loosen earlier this year.

- Drones are increasingly becoming a fixture of active theaters across the Middle East. In January, Russia attempted to blame the U.S. for a “drone swarm” attack on an airbase in Syria; the following April, a Chinese drone operated by the UAE took out a suspected terrorist leader in Yemen.

- “It’s kind of the wild, wild west when it comes to selling things to other countries,” as one aerospace and defense analyst put it in an interview with The Washington Times in July. “[The Chinese] have no problems going in and selling to people we won’t sell to.”