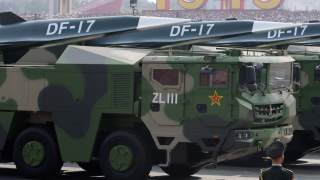 The new boost-glide missile, which reportedly can travel faster than five times the speed of sound, could “transform” Beijing’s strategy for dealing with Taiwan, South China Morning Post reported.

The DF-17 first appeared in public in Beijing during a military parade celebrating the 70th anniversary of the founding of Communist China. “Observers were surprised to see 16 DF-17s on their launchers during the Oct. 1, [2019] National Day parade,” South China Morning Post reported.

The DF-17 is a two-stage weapon with a rocket booster and a high-speed gliding warhead. The DF-17 reportedly can strike targets over a distance of nearly a thousand miles. Its speed and flat trajectory could complicate interception attempts. Traditional ballistic missiles such as the DF-15 and DF-16 arc higher than the DF-17 does, making them easier to destroy mid-flight.

The United States is developing its own hypersonic missiles and aims to deploy them in the early 2020s.

China first tested the DF-17 in 2013 and rushed the weapon into service. It’s unclear how many of the missiles China possesses and how it plans to use the missiles during wartime. Most importantly, it’s not obvious that China has built a sensor network capable of selecting targets for the DF-17.

South China Morning Post conceded that the DF-17 isn’t the best weapon for all targets. “The DF-17 could hit the U.S. fleet in Japan’s Yokosuka [naval base] and destroy the THAAD [sites],” an unnamed military insider told the newspaper, “but for now it is unable to hit high-speed moving warships like an American aircraft carrier.”