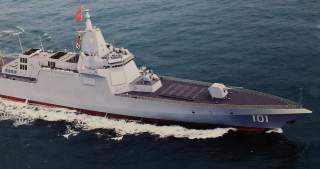 That capability places the Type 055 cruisers in the same class as the U.S. Navy’s own large surface combatants.

While experts long have suspected that the Type 055s would carry land-attack missiles, the weapons-fit remained unconfirmed until the Chinese navy announced it on social media in late December 2019.

The Type 055 is the only 10,000-ton-displacement destroyer or cruiser in service in the Asia-Pacific region. The Chinese navy commissioned the first Type 055, Nanchang, in April 2019. Seven more Type 055s are under construction, fitting out or awaiting trials.

The YJ-18 has a range of around 300 miles. The CJ-10, a copy of Russia’s Kh-55, reportedly can travel as far as 800 miles. It’s unclear which of the cruise missiles the navy considers to be the land-attack weapon. It’s possible both possess land-attack capability.

With a full suite of anti-air, anti-ship and land-attack weapons, the Type-055 possesses roughly the same capabilities as an American Arleigh Burke-class destroyer, Ticonderoga-class cruiser or Zumwalt-class stealth destroyer.

The Chinese fleet reportedly intends to assign the Type 055s to its newly-forming carrier battle groups. The Chinese navy has two carriers in commission, Liaoning and Shandong. A third, larger carrier is under construction and a fourth reportedly is in the planning stage.

If the Chinese fleet follows the American model of force-generation, it could assign a single Type 055 to each carrier battle group. The cruiser would function as the air-defense commander for the group, coordinating air- and missile-defense on behalf of the carrier and other escort ships.

But the Chinese navy reportedly plans to pause carrier-construction after the fourth vessel, leaving it with at most four carrier battle groups by the late 2020s. The remaining four Type 055s that aren’t in carrier groups could function as the lead vessels in powerful surface action groups.

It’s worth noting that while China is growing its force of land-attack-capable large warships, the U.S. Navy actually has proposed to reduce its own force of similar vessels. Despite a legal requirement to grow to 350 ships, the U.S. Navy has proposed to slow ship construction and also accelerate decommissionings after 2020, potentially shrinking the front-line fleet from 290 ships in 2019 to as few as 287 in 2025.

The cuts to new production would include several of the latest Flight III Arleigh Burke-class destroyers. Four Ticonderoga-class cruisers would leave the fleet years earlier than the Navy originally planned on. The budget-driven cuts are likely to face stiff opposition in Congress, which ultimately decides the shape and size of the fleet.

Of course, the Chinese fleet doesn’t just compete with the American fleet. It also faces off against the navies of America’s Pacific allies. “Type 055 also has been compared to other warships deployed in the region, notably South Korea’s Sejong the Great class and Japan’s Atago class and its newly launched Maya subclass,” South China Morning Post reported. “Both the Sejong- and Atago-class destroyers have full displacements of around [8,500 tons] and Aegis combat systems, with the Sejong the Great class boasting a 128-cell [vertical launch system].”