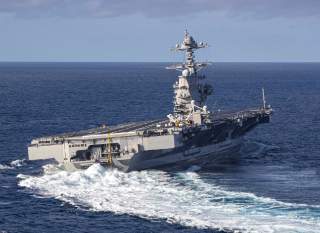 It’s all but official. The U.S. Navy is giving up on its plan to grow its front-line fleet to 350 or 355 manned ships. Budget pressures have rendered the existing fleet plan unaffordable.

There’s just one realistic way forward for advocates of a much bigger fleet. Robots.

The Navy signaled its intention to abandon the current fleet expansion in a December 2019 memo to the White House’s Office of Management and Budget. The memo acknowledges what experts long have warned. That the 350-ship plan would cost far more than the Navy realistically could expect to get from Congress over the roughly 20-year duration of the expansion.

In the December 2019 memo, the Navy proposed to reduce the construction of Arleigh Burke-class destroyers between 2021 and 2025 from 13 ships to just nine. Over the same five-year span, the fleet would decommission early 13 of its 22 Ticonderoga-class cruisers. The moves would save more than $10 billion from an overall $100-billion, five-year shipbuilding scheme.

The net result of the construction slow-down and early retirements would be a reversal of the fleet’s slow expansion since the administration of former President Barack Obama. The Navy’s “battle force” would decline from 290 ships in 2019 to 287 in 2025.

The Navy long has wanted to decommission the aging cruisers, the youngest of which entered service in the early 1990s. The hard-working cruisers in recent years have suffered structural problems. But Congress repeatedly has balked at proposals to axe the cruisers, which with their roominess and extensive communications equipment perform a vital function as the lead air-defense ships for aircraft carrier battle groups.

Despite wanting to send the Ticos to the breakers, the Navy has never fully explained which ships would replace the cruisers as air-defense commanders. The latest Flight III Arleigh Burkes possess better radars than do earlier ships in the same class. With some modifications, the Flight IIIs potentially could function as air-defense commanders. But the same Navy memo that proposed to decommission cruisers also cuts back on the production of new Burkes.

This dilemma is the perhaps inevitable consequence of the Navy planning for an expansion that outside experts strongly believed was unaffordable.

The Obama administration actually was first to advocate a bigger fleet. In 2016 outgoing Navy Secretary Ray Mabus conducted a force-structure analysis that called for 355 ships, up from the previous goal of 308.

But expanding the Navy under any administration always was an unlikely proposition. It became even more unlikely as Trump and his Republican allies in Congress cut taxes for wealthy Americans, resulting in trillion-dollar annual budget deficits.

Then, in November 2018, Democrats won control of the U.S. House of Representatives, breaking Republicans’ hold on the federal government.

Even before the political landscape shifted, one Congressional shipbuilding expert told The National Interest, on condition of anonymity, that quickly growing the Navy by 75 ships simply by buying new vessels "would be impossible."

Adm. John Richardson, the chief of naval operations, in a February 2019 conversation with reporters signalled lower expectations regarding fleet size. "In light of the new National Defense Strategy and changes in the security environment since that was put out, we’re doing a new force-structure assessment," Richardson said. "We’ll see where that goes."

The window for a 350-ship fleet has closed. "Need a hard date for when it closed?" one Navy blogger asked in mid-February 2019. "That's simple; last week's [State of the Union address]. There was no mention of growing our Navy. The [commander in chief] isn't going to invest political capital in it."

As the 350-ship fleet faded as a concept, other ideas emerged. In early 2019 the Navy floated the idea of expanding the fleet without necessarily adding traditional, manned vessels. Robotic ships could help to solve the Navy's growth problem, said Rear Adm. John Neagley, the Navy’s executive for unmanned and small warships.

"Part of the value of having unmanned surface vehicles is you can get capacity at a lower cost," Neagley said. An operational version of the Navy's Sea Hunter experimental robotic anti-submarine ship would cost just $20 million, Breaking Defense reported.

By contrast, the Navy spends more than $2 billion for a new Burke.

Robotic ships also are cheaper to operate than manned ships are. Sea Hunter costs around $20,000 per day to maintain, according to the Defense Advanced Research Projects Agency. A manned destroyer costs hundreds of thousands of dollars per day.

Acting Navy secretary Thomas Modly, who took over from his predecessor Richard Spencer in November 2019 after Spencer resigned in protest of Trump’s controversial pardoning of military felons, is pushing hard for cheaper robotic ships to replace manned vessels in a reconfigured fleet build-up.

In a December 2019 memo of his own, Modly announced the Navy would “establish an integrated plan to achieve a 355 (or more) ships, unmanned underwater vehicles (UUVs) and unmanned surface vehicles (USVs) for greater global naval power, within 10 years.”

The Navy already has begun the robotic expansion. The sailing branch’s 2020 budget includes a downpayment on a $2-billion plan to build, through 2024, as many as 19 large robotic surface ships and submarines.

If the Navy can convince Congress that unmanned ships should count as battle-force ships, then it might still be possible for the fleet to grow to 350 or 355 front-line vessels. If robots don’t count, then the 350-ship fleet probably is impossible. The Navy knows it. That December 2019 budget memo is proof.