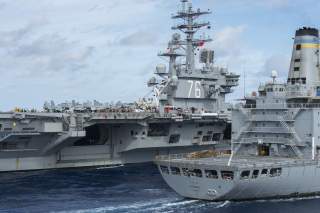 The U.S. Navy finally has a realistic plan for expanding the front-line fleet from around 290 ships in 2019 to a high of 355. The sailing branch is going to start building lots of inexpensive robotic vessels, while also counting them as full-fledged warships.

Acting Secretary of the Navy Thomas Modly in early December 2019 codified this policy in his “SECNAV Vector 1” memo, which called for “an integrated plan to achieve a 355 (or more) ships, unmanned underwater vehicles and unmanned surface vehicles for greater global naval power, within 10 years.”

USNI News was the first to report on Modly’s memo.

Modly’s policy captures two important themes. The dawning reality that the Navy’s previous fleet-expansion plan could cost hundreds of billions of dollars above projected budgets and thus was unaffordable, and service’s growing acceptance of drone ships and submarines.

The Navy since late 2016 has wanted to grow to 350 or 355 front-line ships, including 12 aircraft carriers, 156 surface combatants and 66 attack submarines. "To continue to protect America and defend our strategic interests around the world, all while continuing the counter terrorism fight and appropriately competing with a growing China and resurgent Russia, our Navy must continue to grow," Ray Mabus, Pres. Barack Obama’s long-serving Navy secretary, stated in December 2016.

But it became clear even as defense budgets swelled after 2016 that the 355-ship fleet was unaffordable. “Will we get to 355-ships?” Vice Chief of Naval Operations Adm. Robert Burke said in October 2019. “I think with today’s fiscal situation, where the Navy’s top line is right now, we can keep around 305 to 310 ships whole, properly manned, properly maintained, properly equipped and properly ready.”

Counting robotic vessels against the 355-ship requirement changes the arithmetic. It’s worth noting that Congress must approve legislation allowing the Navy to count unmanned vessels as “battle force” warships.

The Navy expects by 2030 to have 331 front-line ships, according to the 2020 edition of the fleet’s shipbuilding plan. The sailing branch would need just 24 additional vessels to reach 355.

That shouldn’t be a problem. The Navy plans by 2024 to buy 10 Large Unmanned Surface Vessels and nine Extra Large Unmanned Undersea Vehicles, all for just $4 billion. t would take just nine more robotic ships and subs, likely costing around $2 billion combined, to boost the fleet to 355 vessels.

Boeing is developing the robotic submarines, using its 51-feet-long Orca submersible as a starting point.

The sailing branch hasn’t yet selected a shipyard to build the unmanned surface vessels. The USVs could be similar to the Sea Hunter robot ship that the Navy has been testing since 2016. Sea Hunter is 132 feet long.

The expansion isn’t entirely risk-free. The LUSV and XLUUV at present exist mostly on paper. And in their planned initial configuration both types are small and lightly-armed compared to manned warships.

Moreover, the Navy has just begun to work out a command-and-control construct for actually deploying robotic vessels as part of a mixed fleet of manned and unmanned ships. The service has begun experimenting with a pair of prototype USVs and even stood up a test unit, Surface Development Squadron 1, whose responsibilities will include devising tactics for unmanned vessels. The squadron by 2022 should receive two large and two medium USVs.

The Navy likewise is standing up a second UUV squadron in order to accelerate the integration of bigger and more sophisticated undersea robots.

Even taking into account the integration challenges, Modly’s new policy at least charts a realistic path toward a bigger fleet.